A few things about which I am unenthusiastic 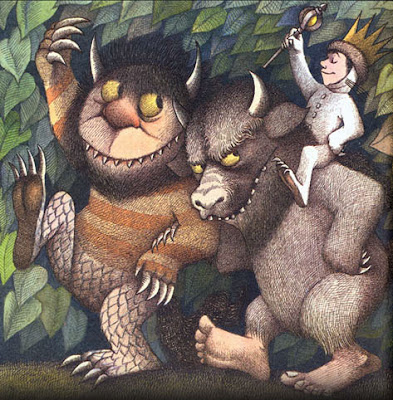 I was looking forwards to seeing Where the Wild Things Are about as much as I look forwards to cleaning the chicken coop. Actually, less, because when you're scooping up wood shavings and hosing down avian waste your thoughts are free to wander, but seated in a multiplex you are psychically trapped. I'm not a lover of fantasy, plus I had read Dana Stevens' review and agreed with her premise, film unseen. (I still do.)
But Owen really wanted to go, it was playing right here in town, so I caved.
To my surprise, I found the early reality-based portion of the movie incredibly moving. It made me cry, an unexpected response that had everything to do with seeing a film anchored in the mind of an imaginative, emotionally volatile 9-year-old boy in the company of my own imaginative, emotionally volatile 9-year-old boy. I thought: This must be sort of what it's like to BE Owen.
I already know what it's like to be a tired and perplexed parent and Catherine Keener was brilliant in that small role. The life-like untidiness of the house; the sensitive, maddening son; the languid adolescent daughter holed up in her room; the school supplies on the dining table; the tantrum over frozen corn -- Spike Jonze really nailed those 20 minutes before dinner when every pot in the house, emotional and actual, seems to come to a boil.  The way he and the actors captured the many layers (absurd, totally mundane, shattering) of the pivotal conflict and honored the perspectives of both the mother and child was, to me, miraculous and strangely edifying.
I wish the film had continued in this vein, but then Max goes to where the wild things are and zzzzz. The beasts were funny, vaguely alarming, beautifully designed, etc. etc. etc., and Owen was enthralled, but I started making to-do lists in my head and wishing I could turn on my cell phone to see how much longer the ordeal would last. My makers forgot to install the fantasy chip.
Today, I clean the chicken coop.
Posted by tipsybaker at 10/30/2009 06:48:00 AM