How to Cook Everything Vegetarian: Fettuccine Alfredo & Raw Beets 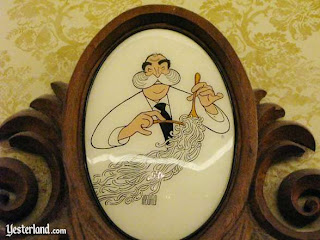 I borrowed that picture from Disney, but they can have it back any time they ask. It's a caricature of Alfredo di Lelio, the Roman restaurateur who invented fettuccine alfredo in 1914 to soothe the stomach of his pregnant wife. Or so says the internets.
Very proud of last night's fettuccine alfredo dinner, which I made from scratch using Mark Bittman's How to Cook Everything Vegetarian. Two reasons for pride:
1. Spinach pasta. First time ever, huge hit. It was a little gnarly rolling this out because the dough was super-sticky even after copious additions of extra flour, but we muddled through and the results were a brilliant grass green and ridiculously delicious.
2. Wicked alfredo sauce. I've never had an alfredo this good. I attribute its excellence to the eggs that Bittman has you whisk into the warmed pasta bowl along with cream and a mountain of Parmesan. Yes. Horribly fattening. But great.
I also made Bittman's raw beet salad because I had this vision of a painterly red-and-green meal. My expectations for the salad were low, as I think of raw beets as a food people ate out of desperation while hiding from Nazis in Ukrainian barns.
But it turns out that raw beets you shred in a Cuisinart and dress in a mustardy vinaigrette make an earthy salad that is as tasty as it is bright. 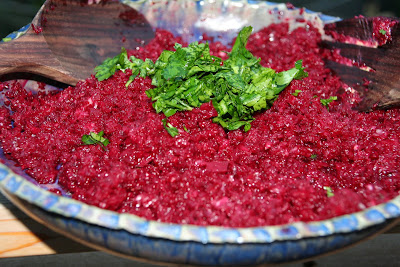 At least I thought so. I was the only one in the family willing to try it.
How to Cook Everything Vegetarian is an awesome book. I appreciate it more every day. While I don't feel any healthier and I'm definitely not slimmer, our food bills have dropped noticeably and precipitously during this meatless period and we've been eating really well.
Posted by tipsybaker at 2/26/2009 07:23:00 AM

Labels: How to cook everything vegetarian
Email ThisBlogThis!Share to TwitterShare to FacebookShare to Pinterest