How to Cook Everything Vegetarian: Ravioli & frozen yogurt 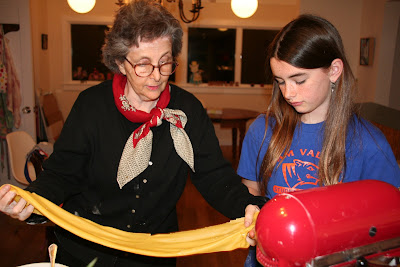 Another Wednesday, another pasta night with my mother. Yesterday, she taught me how to make a whisky sour and showed Isabel how to stomp on egg shells until they're the perfect consistency for the worms in our new worm box. She's a great mom.
Mark Bittman's pasta dough is supple and lovely, the filling for his spinach and ricotta ravioli superb. If we'd just made a butter or tomato sauce, all would have been well. But I was determined to make the walnut sauce which Bittman describes as "a rich, bread-thickened nut sauce that's unbelievable with stuffed pasta."
Mistake. The sauce was super-garlicky and rich and totally overpowered the delicate spinach ravioli. Don't know what he was thinking.
For dessert: blondies (identical to recipe in How to Cook Everything, but with a small amount of whole wheat flour subbed in) which were fine, and frozen yogurt.
Isabel and I are slightly obsessed with replicating Pinkberry frozen yogurt. If you've never had Pinkberry, imagine a tangy, snow-white cream with a pure, very sour yogurt flavor. Bittman's recipe calls for some yogurt, a little milk, sugar syrup and lemon rind. We omitted the lemon rind and you would think the resulting dish would taste purely of yogurt. And it did. Which is when I realized that Pinkberry tastes more like yogurt than yogurt does. How is that possible? An internet search quickly revealed things I didn't really want to know about Pinkberry. 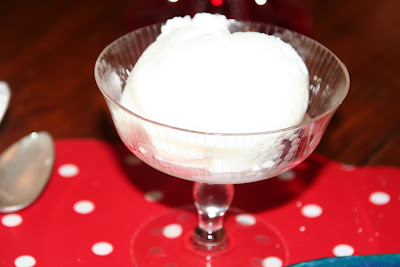 Labels: How to cook everything vegetarian, pasta night
Email ThisBlogThis!Share to TwitterShare to FacebookShare to Pinterest