Platter of Figs: He mostly redeems himself 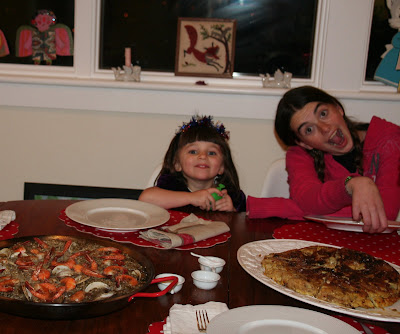 I scored abysmally in my predictions about David Tanis' "Tapas Party" menu.
I also made one horrible, lewd, cringe-inducing joke at last night's dinner. Justine and Michael, I'M SO SORRY. Ashamed.
The food was a hit, anyway, starting with the . . .
Octopus salad. An ordeal to acquire the animal, which had to be special ordered and came frozen in a perfect gray sphere the size and shape of a volleyball. $15 for a 3-pound cephalopod -- such a bargain! Like butchers, fishmongers appear to enjoy special ordering weird stuff and discussing. I have been persuaded to someday grill an octopus, but this one was simmered gently for two hours, chopped into chunks, dressed with olive oil, dusted with smoked paprika, garnished with pickled red onion. "Octopus salad is one of the most delectable things I know," Tanis writes, and he is right. 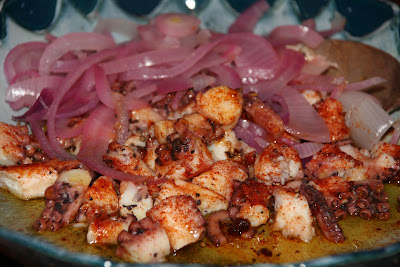 Potato tortilla. Hispanophile Justine is helping me appreciate tortilla as a steady, mild-mannered foil for spicier Iberian dishes and garlicky mayonnaise. The Jeff Daniels of tapas. Tanis' version was big, gentle, rich, very tasty.
Scallops a la Plancha. I thought these would be the highlight of the meal, but ultimately felt the scallops were just an expensive vehicle for green sauce. Delicious, delicious green sauce (cilantro, garlic, hot pepper, roasted cumin, oil) which would be good on almost anything so why pay for scallops.
Black paella with squid and shrimp. A typical paella, only uglier. The squid ink (ninety-nine cents for a tiny envelope at The Spanish Table) tinted pearly bomba rice the color of topsoil. Is that really a good thing? No squid to be had; substituted clams. 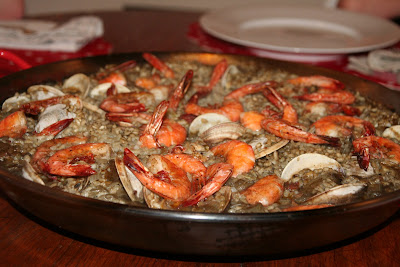 Manchego and membrillo. Breathtaking. Like melon and prosciutto, one of those miraculous salty/sweet combinations. Could have eaten the whole plate all by myself and almost did.
An altogether excellent menu that begins to make up for recent disasters. As Alice Waters might put it, "a little masterpiece."
Having cooked all six of Tanis' winter menus, I'm taking a break from Platter of Figs to resume after March 20 when I'll try his spring meals.
Posted by tipsybaker at 2/09/2009 08:49:00 PM

Labels: Platter of Figs
Email ThisBlogThis!Share to TwitterShare to FacebookShare to Pinterest