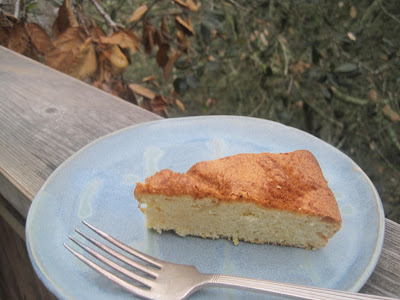 Yesterday evening, my husband called to say he was running late but he called early enough that I hadn't started cooking dinner and so I simply didn't. Instead, I made grilled cheese sandwiches and ate sunflower seeds while leaning against the counter waiting for Dorie Greenspan's quatre quarts cake to bake and listening to The Passage. I drank two sidecars made from the miniature liquor bottles my sister gave me for Christmas and it was very fun. I wasn't drinking to feel better, I was drinking to feel even better, one of several lines from the fairly lame How Do You Know that I can not get out of my head.

Of Dorie G's cake, which is basically a poundcake, Owen said: "That's not cake, it's flavored bread."

The cake was easy and plain. It was eggy. It was flavored bread.

After we'd tasted and rated the quatre quarts, we watched some vintage episodes of House which prompted illuminating, if fractured, discussions of drug abuse, medical drama plot formulas, and Hugh Laurie. My husband came home in the middle of this and, as I've noted many times before, a night of TV, booze, and cheese sandwiches turned out to be altogether more joyful and interesting than when we follow the rules and all sit down at the table for a proper roast bird and try to talk about our days.

Which is what we're doing tonight. There is a chicken in the oven and a brussels sprouts salad on the table as I type and I'm drinking tea. No dessert.
Posted by tipsybaker at 1/08/2011 05:32:00 PM