Here's how you make Dorie Greenspan's gorgeous beggar's linguine: Boil water for pasta and melt a stick-and-a-half of butter (!) in a skillet. Add chopped almonds, pistachios, figs, and golden raisins and cook until the fruit is soft, the nuts are starting to toast, and the butter is dark gold. Cook the pasta. Drain and toss with the mixture in the skillet, making sure that every strand of linguine is coated with butter. Add a half cup of grated Parmesan cheese, salt, pepper, and the grated rind of an orange. Toss some more. Serve.

Magical! This is not for everyone, but it's definitely for me. If I ate this in a restaurant, I would go straight home and post a report on Chowhound about the genius chef. This dish was easy, cheap, unusual, incredibly delicious, and worth the price of Around My French Table. I will make it again soon.

So that was last night's dinner. Owen lit candles for the table, and I also served a special dessert. 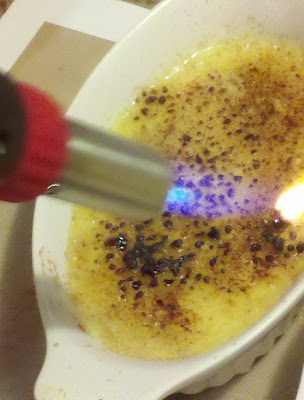 I bought creme brulee dishes at a garage sale 15 years ago, back when I thought life would be full of dinner parties and creme brulee. I have never once used them. Dorie Greenspan has a creme brulee recipe and for Christmas my father gave me a torch, so it was time to dust off the old dishes. That was gratifying. I don't think I got the sugar topping thing quite right -- the shell was very, very thin. But at least there was a shell, and the cream tasted lovely. I will experiment more with this.
Sadly, while eating this nice dinner we had a big argument over what we should all watch on TV together afterwards. Because of the whole Tiger Mother business, the word "garbage" has been banging around in my head.  I would never call my children "garbage," ever, but, probably emboldened by Amy Chua, I did tell Isabel to stop being such a . . .  something else. I felt bad. I felt I was right. I felt bad. I felt I was right. I felt bad. I was right.
Harsh, but right.
Anyway, we watched The Town. It was good.
More Around My French Table reports: