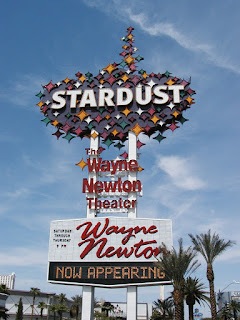 When I was in my teens I thought I would only grow more confident in my judgments as I got older. I thought that the workings of the universe would become ever clearer to me. This seemed logical and obvious.

Now, of course, it seems sweet and naive. In my twenties, I started hemorrhaging certainty. Example: When I was 20 and road-tripping with my sister, I took one look at Las Vegas and thought: What a tacky hellhole. We did not even stop our car. If anyone asked, Las Vegas was totally not my thing.

When I was 29 and flew to Las Vegas to look for my uncle, I took one look at Las Vegas and sighed. What a tacky hellhole. But other people loved Vegas. What was I missing?  There must be something here that I couldn't see or appreciate. I must try to figure out what that was.

I'd become compulsively and exhaustingly self-critical. Every failure was my failure of imagination or intelligence or discernment or humanity. The problem with Las Vegas was my problem. I was like the cartoon of the woman walking down the street telling her friend, "I'm trying to see things from my point of view."

The other day, I searched for my journal from this period. I used to be a great keeper of journals, but while I have many pages of mortifying tiny print documenting loneliness, fights with my mother, and crimes of perfidious boyfriends, I wrote nothing about this trip to Las Vegas to find Richard. So this is all from memory, sitting in a Starbucks in Houston fifteen years later. Lack of notes explains lack of dialogue and specific detail.

I do remember the heat with some precision: It was 114 degrees in Las Vegas when I got there. Walking across the parking lot to the Stardust Hotel was like walking under a giant blow dryer turned to high. Inside that dark, mirrored building, I had to penetrate through a thick rind of slot machines to get to the elevator bank. My room smelled like an ashtray. The first thing I did was call the police department to see if they had any record of Richard in their files. They did not. So I pulled out the phone book, wrote down a list of places one might look for a penniless alcoholic, marked up the map, and started driving around.

Away from the Strip, Las Vegas is vast, dun-colored, and featureless with wide, endless streets like airport runways. It reminded me of a penal colony on the moon. There were no bookstores, no neighborhoods, no trees, no shade, and the only people you ever saw walking were men and women who appeared to be poor or homeless. I could not fathom why this horrible place existed or why anyone would come here on vacation. What was wrong with me?

Once you start looking for homeless people, you see them everywhere in Las Vegas: Black and white and Native American, pushing shopping carts and hauling around plastic garbage bags, dozing under freeways. I drove around to homeless shelter after homeless shelter, carrying around my picture of Richard, which I showed to everyone I met who looked remotely official. Everyone was very nice; nothing bad happened to me. But I wasn't reporting a story and I didn't hang around asking questions like some kind of cool young guy journalist. I just wanted to find Richard.

At the end of each day, I went back to the Stardust, where Chuck Norris was staying with his pretty wife. I think this was her. At night, I would go up to my room, get under the covers and read some Edith Wharton or Barbara Pym or one of those books in which I was earnestly looking for how the world worked. No wonder I was confused.

I called my father and told him I was in Las Vegas looking for Richard. He was irritated. What was I going to do if I found him? I did not know. I just wanted to find him.

The day before I left, I called the jail. I had assumed that the police department and the jail were connected, but at the time they (apparently) were not.

Richard was in jail. He had been in jail the entire time I was there. The charges were "drunk and disorderly" and "indecent exposure." Richard had been "bathing in a gutter."

He had a court date the next day, so I extended my ticket. The next morning, I set out for the courthouse and got lost. Trying to correct my route on those airline runway streets, I ended up missing him by half an hour. I flew home that afternoon. I had not seen Richard, but I had found Richard.

Labels: richard
Email ThisBlogThis!Share to TwitterShare to FacebookShare to Pinterest