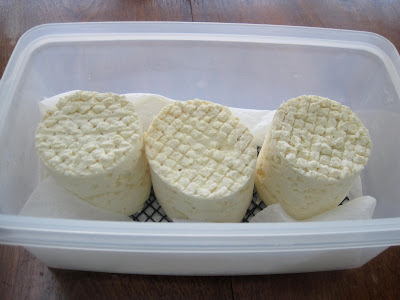 Those are blue cheeses I made last Thursday and decided to age in the refrigerator. Apparently, they're going to be late bloomers.
See this? 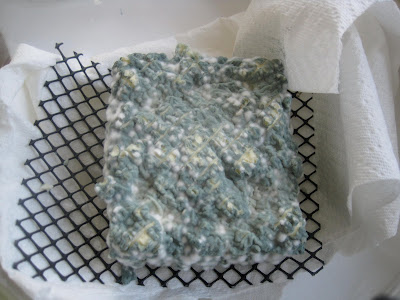 A chunk of the very same blue cheese that I decided to age in the "cave." This hussy is already wearing a tube top and watermelon lip gloss. She smells like blue cheese dressing; I have a feeling she's growing up too fast.
This is the cheese cave: 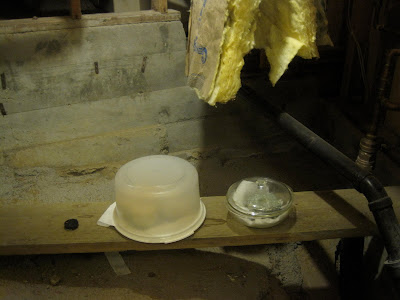 The temperature reads 64 degrees on a hot day and in the low fifties on a cold day -- overall, just a bit too warm for optimal cheese ripening. But I have limited refrigerator space and some of the cheeses -- camembert, cheddar -- have come out of the cave in spectacular condition.
I started making cheese after taking a Davis Co-op camembert workshop back in April and it's my favorite thing ever. If you have any interest at all -- even a flicker of interest -- you should try it. Don't be intimidated. Buy this book and order supplies from this guy. Take a class, if you can. Improvise your cheese molds using soup cans and strawberry baskets. It's harder than baking bread, but easier than stuffing sausage or decorating a cake and far more gratifying, at least to me. Watching a pinch of powder and a few drops of rennet effect transformations on a gallon of supermarket milk is the closest I've ever come to performing magic. I've been about 50% successful with the cheeses, which is 100% more successful than I'd expected.
No verdict yet on either the blue cheese or the Taleggio. 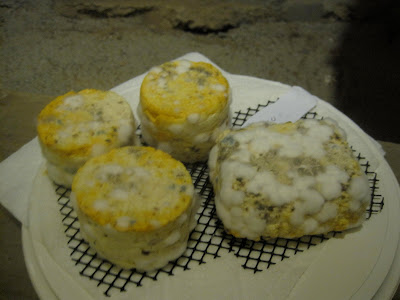 You wash down the rind of a Taleggio every few days with salt water to control the mold, but these babies have still been growing an awful lot of fur.
Chocolate chip cookie update coming soon.
Posted by tipsybaker at 6/16/2010 05:47:00 AM

Labels: cheese
Email ThisBlogThis!Share to TwitterShare to FacebookShare to Pinterest