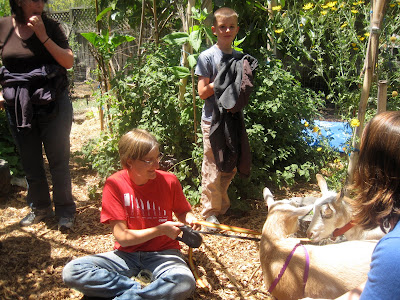 That's not a Novella Carpenter cardboard cut-out Owen is standing behind, it's the real Novella Carpenter, author of Farm City. We took her Urban Goats class yesterday in Berkeley and she was absolutely great, every bit as straightforward and droll and cant-free as you'd expect after reading her book. She gave a PowerPoint presentation about breeds, feed, shelter, etc., then did a hands-on demo of vaccine injecting, hoof trimming, and milking. I've read so much about goat husbandry over the last few months that little of it was new to me, but I'm glad we took the class. She's inspiring.
After that, Owen and I went to a take-out shop I'd heard about called La Bedaine and bought a wild boar terrine sandwich with cornichons and mustard, which is a very Berkeley kind of sandwich. 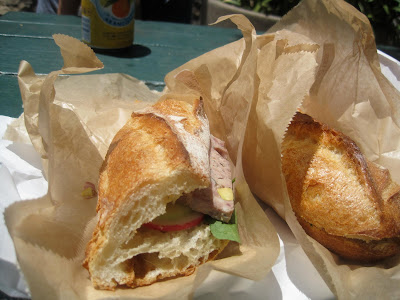 Owen talked so much he hardly touched his portion, so I ate for two, which was okay because there's no food I'd rather get fat on than Berkeley food.
I figured since we were in Berkeley, we might as well make a day of it, so I signed us up for a hippie fermented foods class in the afternoon. As you can imagine, Owen was totally stoked. Who wants to see Toy Story 3 when you can learn to make sauerkraut?
Actually, he went along with it very cheerfully, probably because I was listening so attentively to his monologues. It's amazing what undivided attention can accomplish.
Our fermentation teacher was named Nishanga Bliss. That's a name you either have to live up to or live down, I can't decide. Whichever it is, Nishanga managed. She convinced me of the virtues of fermentation (probiotics) over canning and made a fantastic dill pickle that took about 5 minutes flat (not counting fermentation time) before moving on to kim chi. She also sang the praises of a very pure salt from Utah mined from "ancient oceans" and talked a lot about making her own soda pop. Owen wanted to leave halfway through the class, which I'd expected, but in the car he told me he wants to make pickles this week, which I had not.
Pickle tutorial coming soon.
Posted by tipsybaker at 6/21/2010 04:59:00 AM