Our L.A. trip in a taco shell 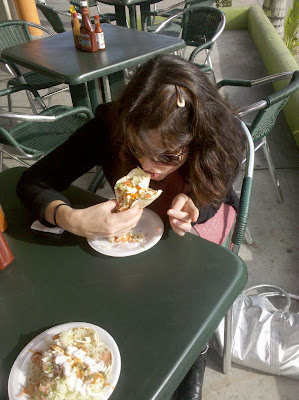 Monday: Fish tacos at Tacos Baja Ensenada in East Los Angeles. My seafood taco was the best thing I ate on this entire trip, not to mention one of the best dishes I ate in 2009. I can't actually remember everything I ate in 2009, but these would be hard to top. 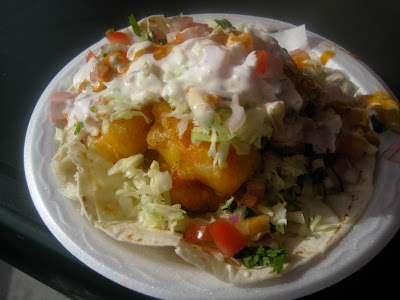 The secret is deep-frying the seafood so it is both crispy and luscious. In Northern California, trendy restaurants often fill tacos with healthful sauteed or baked fish, which is why I thought I didn't like fish tacos. Now I know better.
Tuesday: We intercepted the famous Kogi truck in Encino 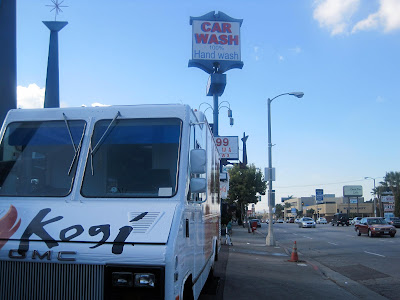 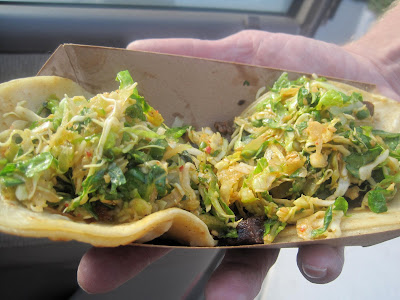 They were more more exotic and almost as delicious as the fish tacos, but not quite.
Then we couldn't find anything else to do in Encino. "I don't think we should make a habit of planning our days around food," said my husband.
Yesterday: He and Owen went to Legoland and Isabel and I stayed in Los Angeles and stimulated the economy. We shopped like shopaholics, which we are not, then went to Wolfgang Puck's steakhouse, Cut, and dined like fat cats, which we are not. We didn't see any movie stars and it was even more pretentious and absurd and expensive than I had anticipated and the food was not amazing, but we had fun in our new party clothes. Isabel's cranberry juice cost as much as two fish tacos. The cheapest steak on the menu cost as much as 16 fish tacos. An order of french fries: 4 fish tacos.
Now we are halfway home, about to dine at Harris Ranch off I-5 where I have always wanted to eat despite all the horrible reviews I just read on Yelp. Because it is there.
Happy New Year, everyone!
Posted by tipsybaker at 12/31/2009 06:40:00 PM