Maybe you really do have to pay to play 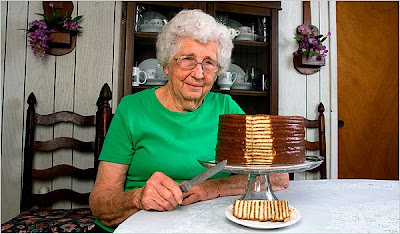 Yesterday's New York Times food section pre-empts regular programming. You have to read this  article about Alabama layer cakes -- from which I swiped the beautiful photo above of Martha Meadows and her "little layer cake." Kim Severson writes at length about Southern holiday cake-baking traditions, which are, apparently, venerable and highly localized. (Scott Peacock, who collaborated on a cookbook with Edna Lewis, is collecting oral histories of the women "in their 80s, 90s, and 100s" who bake these cakes, which sounds like possibly the best job in the world.) The story includes two recipes, including one for that mighty tower of a "little" cake in the picture. It looks delicious. It looks very, very hard. It looks a little bit like a Dobos torte.
The whole food section was phenomenal yesterday. Not sure what to make of the square watermelon, but want to bake stollen and peanut butter blossoms and taste some Moser Truffel.
Back to Moro & me. 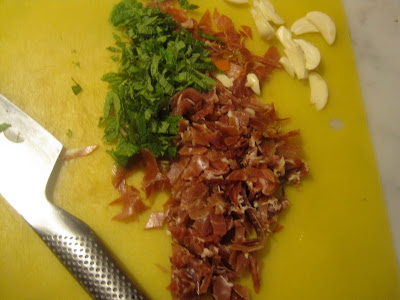 I tested the theory about being crabbier when I cook a routine, practical dinner. Monday -- night of roast chicken and cauliflower -- I was glum and snippy. Tuesday night, made Moro's pea soup with jamon serrano and just opening the little packet of jamon gave me a buzz. Felt fancy. You chop up the jamon and cook it with frozen peas, mint, chicken stock and some other stuff, puree it, and there's dinner. As closure to a rainy day of working, carpooling, arguing over long division, feeding chickens, and cleaning up cat pee, a few slices of jamon struck me as cash well spent on mental health.
Also, cash well spent on soup. Outstanding soup.
Last night, we had a hot chorizo and bean salad for which I bought the specified imported judion beans. Moro describes these as "plump and luxuriously creamy." 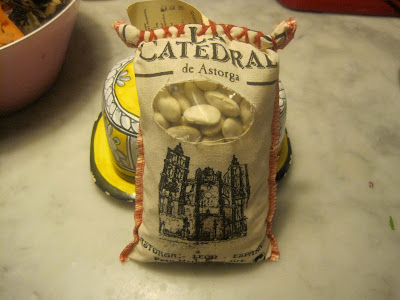 And they were! Which is nice because they cost fourteen times more than what I usually pay for beans. Literally, fourteen times. I won't buy them ever again, but they were huge and buttery and unlike any other bean I've cooked before, and I'm not sorry I bought them once. The recipe calls for briefly marinating the beans with thinly sliced onion, halved cherry tomatoes, and a vinaigrette, then over all of this you toss hot fried chorizo. It was the most delicious dinner I've cooked out of Moro yet, made possible by going to a special store (Spanish Table) and spending extra money.
There's a lesson in this, and it's kind of depressing.
But let's talk about depressing. Later, about to go to bed, I heard a feral scream from the backyard, ran outside with a flashlight and saw a raccoon had peeled back the chicken wire from one of the gaps in the hen house. I've been waiting for the clever, hateful raccoons to weigh in on our poultry project, and this was my lucky night. With his fidgety little paws, this one had unhooked wire from nails and rolled it away from the side of the house and was about to slither in. His pointy face was framed by the inside of the "window" and we stood there staring at each other for about 45 seconds, me, in my pajamas shining a flashlight in his eyes; him, frozen, hoping I would depart so he could begin killing and eating his dinner. My husband came down with a stick and we chased off the raccoon, who then crouched in the street and insolently observed us for a while.  We spent 20 minutes patching every tiny hole in the chicken house from the inside, with a hammer and scrap wood, while all around us the hens purred and clucked. We must really love these chickens because eggs really aren't worth the trouble.
Posted by tipsybaker at 12/17/2009 08:53:00 AM