Didn't buy a muumuu but maybe should have 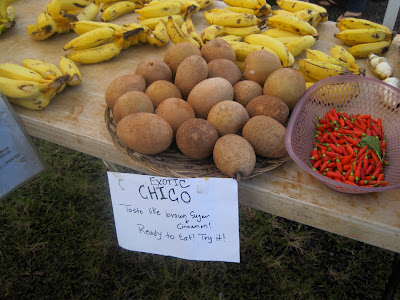 Nothing against Maui, but Kauai has stolen my heart.
I will spare you purple accounts of beaches, farms, botanical gardens, lighthouses, and orchids -- saving them for article --  and stick to the food, which has been excellent and exotic.
To start with, I knew I was wrong to dismiss poi a few posts ago. I just knew I was going to have to eat my words. A local couple I met and conversed with for several hours yesterday told me that there is poi and there is poi, just like there are potato buds and your grandmother's mashed potatoes with butter and cream. What you get at hotel luaus and plate lunch dives, they patiently explained, is no basis on which to judge poi.
This should not have come as a surprise.
It so happened that last night there was a fundraising luau for a community kitchen and poi mill, and this couple assured me that the poi served to a bunch of taro farmers would be spectacular. They were going, and urged me to go. So I went.
It was a lovely event, a local gathering where everyone knew everyone and I knew no one but still got a wholesome contact high from the community esprit. There was live Hawaiian music, a silent auction, a crafts sale, a bake sale, little kids running everywhere. It was like an idealized midwestern picnic, but it was early December, everyone was wearing shorts, and the food was wrapped in banana leaves and cooked in a smoldering pit.
That's a horrible picture, but it was some smashing food. 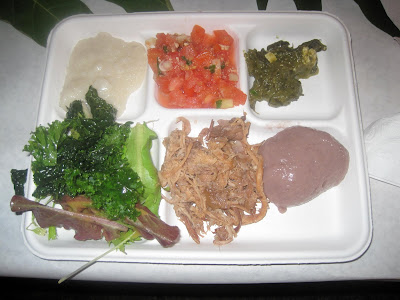 I loved all of it, from the smoky kalua pig to the kale salad, stewed taro leaves, rice pudding, and breadfruit. But what stopped me in my tracks, as promised, was the poi. See liverlike blob at bottom right It was firm, dense, sticky, and intensely, if subtly flavorful. I ate it slowly, savoring it more with each gummy bite. Craveworthy. Now I can go back to California and helplessly crave it.
Speaking of gummy foods, I also bought something called kulolo at the bakesale. 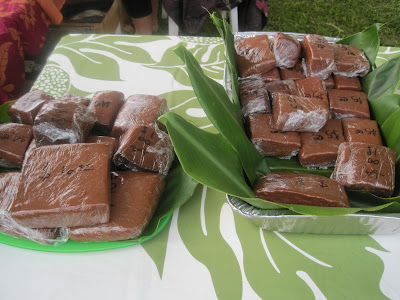 It resembles brownies, but is made from grated taro mixed with coconut and brown sugar and, according to the weary bakesale lady, steamed for 15 hours in the imu, or underground oven. I prefer kulolo to brownies, but wouldn't expect anyone to agree. It's moist and glutinous and tastes like both gingerbread and carob. Delicious.
I am devastated to report that the taro smoothie stand was never open when I drove by, which was only several dozen times.
A few other interesting foodstuffs tasted on Kauai:
-chico. See photo at top.  Is this the same as sapote, about which my Guatemalan grandmother has often reminisced? Not sure. Tried this at the Hanalei farmers' market and the guy selling it said the tree takes 15 years before it fruits. Long-awaited chico tasted like a persimmon crossed with a banana and had the texture of a kiwi.
-deep-fried mochi. Bought these lumpish dumplings at a plate lunch place in Hanalei. 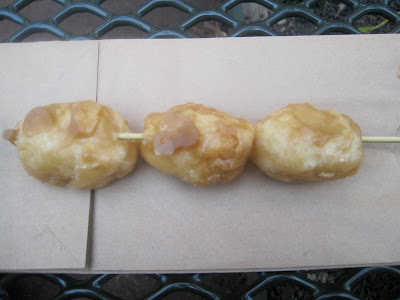 They're balls of mochi that have been skewered, dipped in brown sugar (or something similarly sweet and brown) and fried until they acquire a delectable, shale-like crust. Chewy and enjoyable, if not an instant addiction.
- banana-pineapple frosty. Mahalo to Anonymous who recommended Banana Joe's. 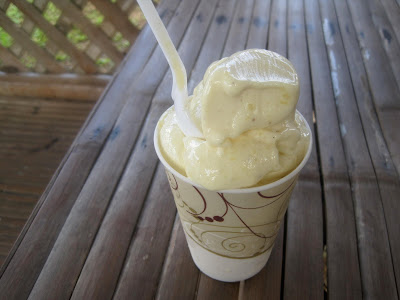 The luscious frosty was made by running frozen bananas and pineapple through a Champion juicer and it was, as some skinny people might say, ice cream without the guilt.
Wishing Well shave ice was inexplicably closed, and I don't think I'll have time to visit any other spots, shave ice or other, this trip. I'm sorry about that. On the other hand, one week is long enough to be the stranger eating alone in restaurants, kayaking solo down the Hanalei River, lurking silently on the fringes of other peoples' luaus. Home to the menagerie tomorrow. 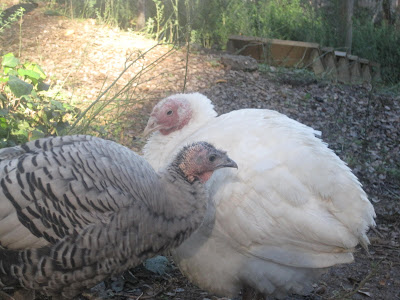