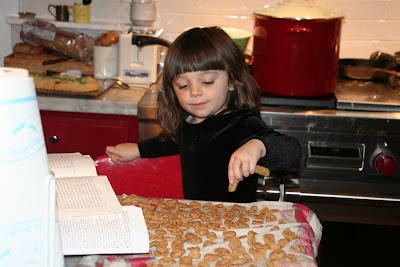 Impromptu party the other night. Justine and Michael brought over their majestic jamon serrano and a shaker full of bourbon cocktails. The jamon is always a treat, but I was not delighted by the latter contribution. For me, bourbon is a roguish old sweetheart whom I no longer let in the door. But when he tags along with people like my sister, well, who wants a scene? And once he crossed the threshold it was like a Dolly Parton song. Couldn't resist.
But I am happy to report that while I may occasionally backslide, bourbon doesn't fool me anymore. I don't expect him to be anything but dark, fascinating, and basically evil. Yes, bourbon, you are EVIL!!! I've since had similar epiphanies about vodka, who is also banned, but he's the cold, silent type and was much easier to dump.
No, I'm not blogging drunk. I'm blogging exhausted/manic because we just got back from a day at the mall (there are some crazy bargains out there), at the San Francisco Ballet Nutcracker, at Safeway, and now we are transitioning into our annual holiday "baking night."
But I was writing about a party wasn't I.
Along with the jamon and bourbon, Justine, Stella, and I made this exotic pasta dish from Lynne Rosetto Kasper. Official name: Thumb pasta and tomato braised beans Piacenza style. It's a thick bean soup into which you toss small discs of homemade pasta (see little brown items in photograph at top) that contain breadcrumbs and are hence slightly crunchy. A lot of manual labor, hearty, nourishing, will probably never make again. 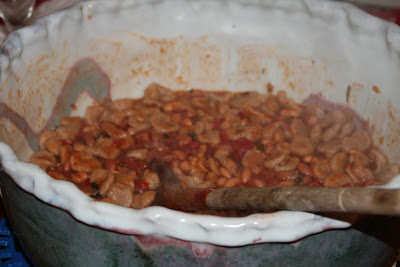 Dessert: ciambelle, another dry, lemony Mediterranean pastry, this one filled with apricot jam. Simply lovely.
Must now go bake.
Posted by tipsybaker at 12/22/2008 06:54:00 AM