The National Appetizer Crisis: A Retraction 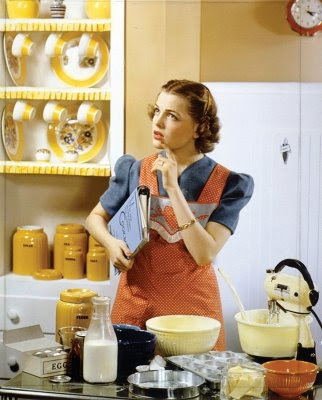 Alright, there is no "national appetizer crisis." I've been trying to concoct some b.s. theory just to save face. Can't.
That said, I do think there's a black hole in our cuisine where the shrimp molds, cheese balls, and canapes used to reside. I have two mental images of a cocktail party circa 2008:
1. The fancy catered affair at which crab cakes and hamachi are passed on silver trays by attractive servers in black pants.
2. The homey party where you'll find a bowl of guacamole on the coffee table along with other mismatched and dippy ethnic dishes, like hummus and tapenade.
What happened to the middle ground? What happened to the tidy, pretty, make-ahead hors d'oeuvres that the 1960s hostess carried into the sunken living room to be consumed with a pitcher of martinis?
That was what I was after: tidy, pretty, make-ahead.
I wasn't thrilled with what I served at Justine's surprise birthday, but for the record, here's the menu:
-Smoked salmon rolls. Mark Bittman's recipe from the New York Times. Couldn't get the fish to roll neatly around the lemony ricotta so made a few messy little roll-ups and quit. Threw newspaper into the fireplace.
-Ajwain cashews from My Bombay Kitchen. Good.
-Spiced pecans. Good.
-Date nut bread from Martha Stewart. Originally intended to top with cream cheese and chutney, but after sampling decided it was better plain. Good enough.
-Benne wafers. More dessert than cracker. Good.
-Fig tapenade. Served on baguette rounds. Not bad.
-Cheese straws. Long, skinny, breakable. Good.
-Chicken liver pate on toast cut into flower shapes. Martha Stewart's recipe. Better to look at than eat.
-Sausage rolls. Miniature sausages wrapped in a buttery yeast dough and baked, a.k.a. pigs-in-blankets. Recipe courtesy of my brother-in-law's mother. Served with bowl of catsup. Got more compliments on these than anything except the meat (see below).
-Tuna mousse. Made by my mother in a copper fish mold with a pimento-stuffed olive to resemble bloodshot eye. Served with crackers. Silly name, but delicious.
-Avocado toasts. Mashed avocado and lemon on garlic toast. Similar to guacamole but neater and tastier.
-Aged beef tenderloin 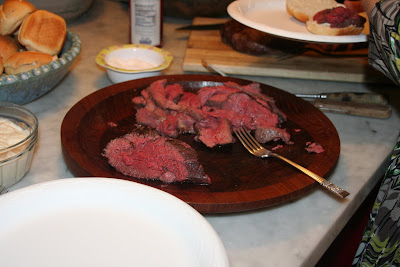 Pictured here is roughly 5% of the meat that the very celebrated butcher shop convinced us we needed. Swindlers. So expensive. How expensive? I'm ashamed to say, but my mother paid and it was worth every penny. (I hope she thought so too.) Velvety and rich, this was the tenderest beef I have ever eaten. Served with rolls and
-Macaroni and cheese which seemed easier than potatoes au gratin and pleased the children.
Dessert was a bakery cake.
Just typing this out I am completely exhausted.
Posted by tipsybaker at 12/10/2008 02:02:00 PM

Labels: Parties
Email ThisBlogThis!Share to TwitterShare to FacebookShare to Pinterest