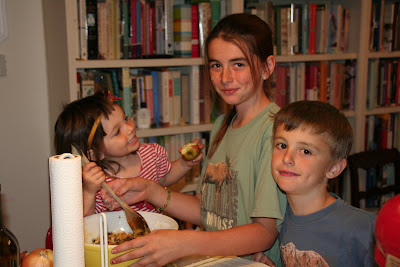 Six people, two veal chops. That wasn't the plan, but then Stella came over, and then Juliet. So there were six of us and the two little oven-roasted veal chops. And yet somehow, we ended up with leftovers.
Here's how:

1. I made cornbread. Louis Osteen's recipe in Charleston Cuisine is the roughest, grainiest cornbread I have ever tasted. No flour or sweetener to soften the effect. It was the kind of austere cornbread you imagine some poor guy in overalls taking in his lunch pail to eat in the cotton field with a chunk of salt pork. It was the kind of cornbread you wrap in a bandana and carry for sustenance as you escape to the North.
2. I brought out the honey. You know, cornbread and honey.  Stella was so enraptured that she did not want her pathetic scrap of meat, though I gave it to her anyway.
3. Juliet doesn't eat baby animals. Actually, she has two rules: no baby animals, and no liver.
4. The veal chops just weren't that great.
What was definitely great was the green bean and potato salad, an Alice Watersy dish, the leftovers of which I am looking forward to having for lunch.

Sadly, the Pawley's Island Pie -- chocolate chips, walnuts, eggs, butter and sugar all baked in a crust -- was kind of mediocre. How could this be? We had high hopes, but it turned out soupy and too sweet, though, like the cornbread, it went over big with kids, who ate giant bowls of it.
So, in the end, I only needed two veal chops. In fact, I could have made do with one.
Posted by tipsybaker at 10/23/2008 07:16:00 AM