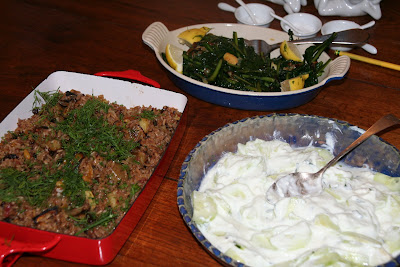 Lesbian food. That's what Mark calls everything I've cooked out of Arabesque, whether or not it's even LEBANESE.
Totally bugs me.
I need a new family or I need a new cookbook. Probably both, but one is easier to replace than the other so I guess these are the death throes of Arabesque.
I'm in a terrible mood.
I made another Claudia Roden/Middle Eastern dinner last night:
-Moroccan chickpeas
-Eggplant pilaf
-Cucumber and yogurt salad
-Sauteed escarole with caramelized onions.
Nothing spicy, nothing gross (unless you count eggplant and leafy greens, which you shouldn't), nothing smelly, nothing visceral.
Owen sits down and lets out a wail. He pokes at the microscopic pile of chickpeas I have placed on his plate.
Owen: Chickpeas? You made chickpeas? You know I don't like chickpeas.
Tipsy Baker: You just have to taste one chickpea. Just one. (This is how low my standards have sunk. I, who was forced as a child to eat everything from liver to frozen peas.)
Owen: What?? Chickpeas are bitter. You know I hate chickpeas.
Tipsy Baker: Why are you staring at me, Mark?
Mark waves to the array of food I have placed on the table with a thin smile.
Mark: You've set up some pretty harsh tests, here.
Tipsy Baker: What are you talking about? I asked him to eat a single chickpea.
Mark: I mean, this is challenging food.  I object to that stuff in the rice.
I'm not sure how I maintained my famous madonna-like composure. I'm sure the second goblet of wine helped.
I know Mark would rather be dining on PastaRoni, upon which he subsisted before we married. And he has often said he wishes that food came in a pill. I can see that for a man of simple tastes, living with my cooking style might be a monumental drag. And I guess I should appreciate his patience, tolerance, sense of humor, willingness to eat Lesbian food when what he really wants is a bag of Fritos, etc. etc. etc.
Is he a saint, or what?
But I do wish he would restrain  from offering critiques of our meal while Owen is listening, and I wish he would cover me as I fight the battle of the freaking chickpea. And I don't think he should have made Owen toast with jelly as soon as dinner was over.
Anyway, the eggplant pilaf was fabulous, and it was all that "stuff" -- roasted eggplant, pinenuts, currants -- that made it so. Isabel ate a lot of chickpeas, and had seconds of cucumber salad. So that's something.
I'm still in a terrible mood.
Posted by tipsybaker at 10/15/2008 08:54:00 AM

Labels: Arabesque
Email ThisBlogThis!Share to TwitterShare to FacebookShare to Pinterest