Best of the Best from Alaska: Biscuits & Jam 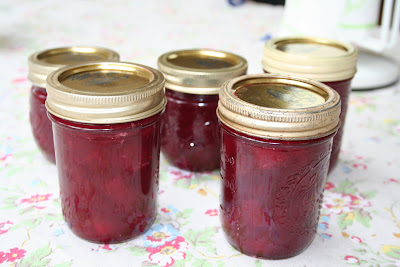 I gave the The Best of the Best from Alaska one last shot after last night's debacle.
This morning I made a batch of rhubarb jam, the recipe for which originally appeared in a Presbyterian church cookbook published in Skagway, Alaska.
When I was growing up, my mother canned prodigiously, hundreds and hundreds of jars of fruit, jam, pickles, and juice emerged from her steaming kitchen every year. It was a crucial piece of her '70s earth mother phase, along with vigorously pushing the carob, honey and whole wheat.
But my mother never would have made this particular rhubarb jam; it would have violated her principles. (And good principles they were.) You boil the rhubarb with five cups (!) of sugar until it collapses into a super-sweet soup. Then you add a large box of cherry Jell-O and some pectin. Pour
into sterilized jars. Seal.
Isabel made 1-2-3 biscuits (also from Best of the Best) with which to sample the fresh jam.
The biscuits: easy and great.
The jam?
Mark shouted: "This tastes like Lifesavers!"
Isabel tried the jam, then opted to eat her biscuits plain.
Owen took one bite and cried, "You can't give any of this away! You have to keep ALL of this. It is SO good. It's the best jam I've ever eaten!"
It was as if I'd just given the boy a new Scorponox action figure.
Owen gets his wish. I have five jars of garish, scarlet, exceedingly sweet, decidedly artificial-tasting Jell-O jam that I can't imagine sharing with anyone who is not 7-years-old. 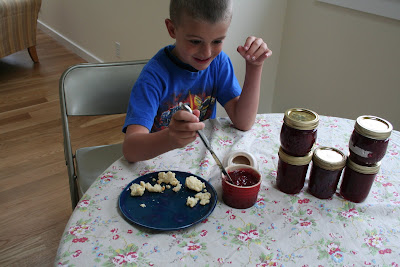 Labels: best of the best from alaska
Email ThisBlogThis!Share to TwitterShare to FacebookShare to Pinterest