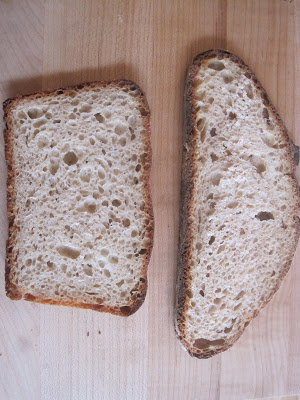 As requested by a few commenters, the other day I baked the Moro bread (left) substituting whole-wheat for some of the white flour. For comparison, I also made a loaf of Jim Lahey's no-knead wheat bread (right).  (As many of you know, Lahey is the New York City baker behind the "no-knead" bread popularized by Mark Bittman a few years ago. )
Lahey uses a 3:1 ratio of white to wheat flour, a proportion he came up with after much experimentation. To make his bread, you mix the dough roughly then let it sit for 18 hours. After this you shape it into a round, let it rise for 2 hours, and bake in a Dutch oven. I wish I'd photographed the bread when it emerged from the oven, as it was a dark and noble loaf.
Because the 3:1 ratio worked for Lahey, I used a 3:1 ratio of white to wheat flour in the Moro bread. It took longer to rise than usual -- maybe 6 hours -- but otherwise worked beautifully. And it was better than the Lahey bread -- chewier, crustier, tastier. I don't understand how this can be, as they contain the same ingredients and it goes against all logic that the "quick" bread would be better than the long-risen. But it was better. The vote among four tasters was unanimous.
Speaking of voting, Isabel and her friend Juliet have taken to playing Top Chef, and today I got to judge. The ingredient was flour tortillas, and here's one of the more appetizing dishes they presented: plain boiled macaroni on tortilla strips garnished with cold tomato paste. 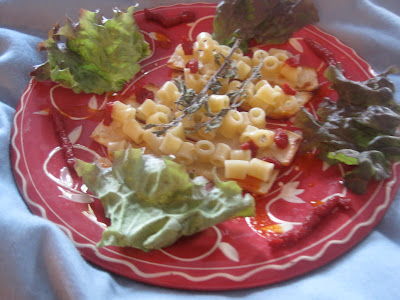