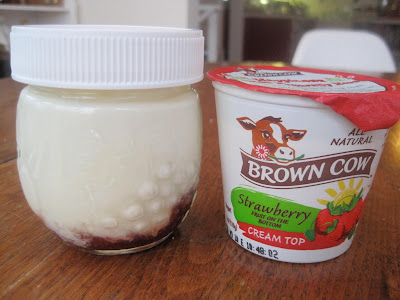 On the left is homemade yogurt with strawberry jam. What's on the right was marked down at Whole Foods this week.
Although I make yogurt all the time, I've hesitated to send a child to school with homemade yogurt in a canning jar because I worried it might be embarrassing, like going to school in a dress made from a flour sack. But Owen, who is a 9-year-old ecofreak, loved the idea. I questioned whether, for all his scruples, he would find strawberry jam an acceptable substitute for "fruit-at-the-bottom." He did. Amazing. It has really bugged me to make great yogurt and then feed the kids expensive and mediocre single-serving cartons of Dannon/Yoplait/Brown Cow just because they're pre-sweetened and portable. Non-serious problem now solved.
As for the yogurt itself, I used the Moro recipe, which is much fussier than my go-to recipe in Anne Mendelson's Milk.
Mendelson's recipe involves heating milk and cooling it, adding a few spoonfuls of "starter" yogurt then putting the mixture somewhere warm to sit overnight.  In the morning, you strain the yogurt for a few hours to thicken. It's like Greek yogurt, and it's fabulous. (This is virtually identical to Mendelson's formula, and if you've never made yogurt, you should try it.)
The Moro recipe calls for boiling milk until it reduces by a third, which takes a while, then adding cream. You cool this decadent mixture, stir in your starter, and put it somewhere warm to sit overnight. It is also fabulous, perhaps slightly more fabulous than Mendelson's yogurt, if not fabulous enough to merit the extra effort. It is also extremely fattening.
Still, I count this yogurt as one more reason to love the Moro cookbook.
In other news, I finally got around to reading Girl with the Dragon Tattoo. Not for everyone, this best-selling mystery, as it is lurid, grisly, intricately (some might say "implausibly") plotted, and overpopulated with sadistic Swedish sex maniacs. I never wanted it to end. Have now embarked on the sequel instead of taking down the Christmas tree. There are times when serial killers are better companions than sentimental Christmas ornaments, though I really do need to take down that tree.
Posted by tipsybaker at 1/28/2010 04:56:00 PM