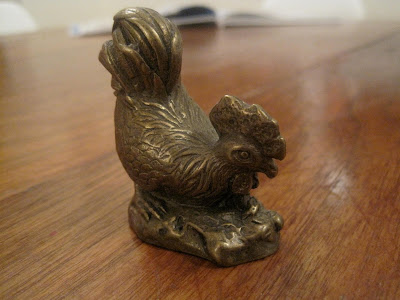 Here's a sentimental little story about a day that started badly and ended well. There's a lesson in here, one I manage to repeatedly unlearn.
My sister-in-law Amy is visiting from Connecticut, along with her 8-year-old son J. It was just J and me the other day, after everyone else went off to job, conference, or school, and I figured we'd hang around the house, he'd play with Legos, I'd do some work, do some cleaning, and wallow in sadness and anxiety over my mother. It's become one of my favorite pastimes.
Right after breakfast, J came into the room and said brightly, "Do you think we can maybe leave the house sometime?"
Tipsy: Sure. What would you like to do?
J: Maybe we could take a walk to, like, an ice cream store?
Child after my own heart. Suddenly the lack of a decent plan for J's day seemed unforgivably lame. His special trip to California and the mopey aunt can't change out of her robe?
So I took him to Chinatown. We went to the live poultry market, the Clarion Music Center, old St. Mary's Cathedral,  and the Golden Gate Bakery, where they sell the best warm egg custard tarts. 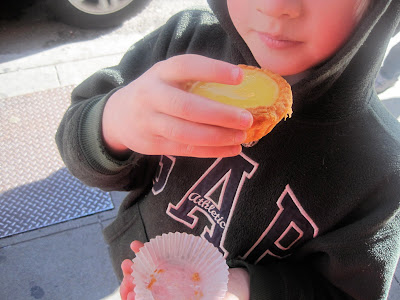 J did not care for the tart. I always make people try these custard tarts, but they never love them as much as I do.
We rode a cable car, which I have not done in 30 years. I couldn't tell if J thought it was super-cool, or boring, because he was so grave and watchful. I thought it was super-cool. The City has a completely different aspect when you observe it from a side-facing position in an open vehicle. Everyone looks at you like you're a clueless tourist, but jaded San Franciscans who go 30 years without riding the cable car are the clueless ones.
Then we walked to Hang Ah Alley to have lunch at the Hang Ah Tea Room, where my father used to take me when I was a child. There's something about the feng shui of Hang Ah Alley that's very special. You enter from the middle of a extremely steep and busy Chinatown street, but the alley itself is always calm and quiet. It adjoins a playground, and right next door to the tea room is a mysterious club where elderly Chinese people sit around all day playing mah-jongg. (I thought it was dominoes, but did some research and it seems more likely that they are playing mah-jongg.) If you stand silently you can hear the tiles softly clicking and kids shouting and cars going up and down the hill and it's really nice. That's the best I can do by way of explaining the magic of Hang Ah Alley.
Since the tea room was closed, we found another dim sum restaurant and did some serious over-ordering. My children are delicate, nervous eaters, but J is neither and ate the way I used to eat when presented with exotic fried and steamed tidbits involving shrimp, pork, and garishly colored sauces. It was fun to watch. 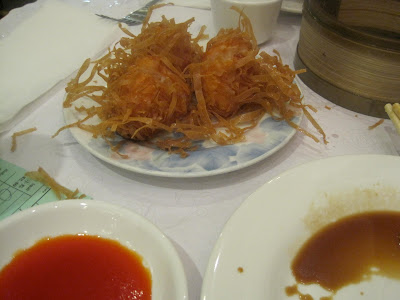 Those look like an alien life form, but were extremely tasty.
After lunch we tried to buy gifts for everyone we could think of at the cheap trinket shops. J took great care with his selections, and we examined many small green buddhas, swords, and tacky paper fans. He got a license plate with his name on it for himself, a black satin jewelry box for his sister, a pink jewelry box for Isabel, a dragon pendant for Owen, and a tiny creamer shaped like a cow for Amy. At one point he picked out a cute little bronze chicken and held it up with a triumphant expression on his face. I said, "You want to get that for Owen?"
He said, "Maybe for you?"
I almost burst into tears. Love my chicken.
Then we collected Owen from school and finally made it to the ice cream store. 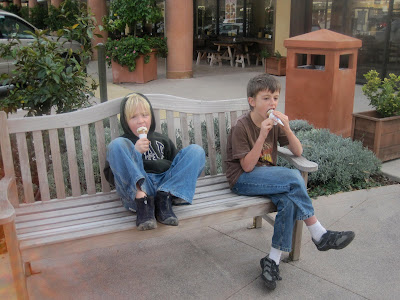