This soup is good food 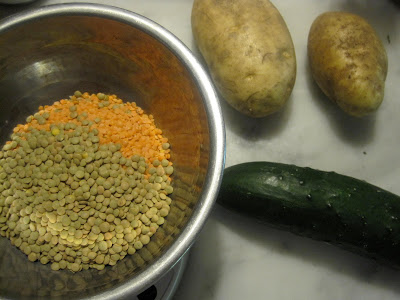 I bought dried fava beans a few weeks ago to make Moro's fava bean, potato, and cucumber soup, but last night could not find them in the chaos of the pantry. Used lentils instead, with no ill effects. This soup could not be much easier. You cook the lentils (or favas) in one pot, while you saute onions, potatoes, and some fresh dill in another. Add lentils and their liquid to the softened vegetables, puree, reheat, add a big heap of grated cucumber, and serve.
It was the idea of cool, grated cucumber added to thick, hot soup that drew me to this recipe. It's supposed to make the robust soup more refreshing, and it absolutely did. Recipes like this one -- simple, delicious, and novel -- make me love the Moro cookbook.
Obviously, it is not an exquisite broth you would serve in demitasse cups, but it made a hearty, healthy dinner enjoyed by everyone, even Owen, who puts soup -- "except clam chowder" -- on his list of loathed foods.
Meanwhile, my mother has been in the hospital for 5 days and might go home tomorrow, though they say that every day. Her appetite is not the heartiest and she eats about three bites of every meal and then we scrape the leftovers into a bag and I take it home for the chickens. I am oddly uncomfortable feeding the chickens pasty hospital oatmeal and revolting overboiled vegetables. It's sad that a person feels creepy providing birds with "food" that is routinely brought on carts to ailing, demoralized human beings.
Posted by tipsybaker at 1/27/2010 07:28:00 AM