Into the Vietnamese Kitchen: What would Tami Taylor do? 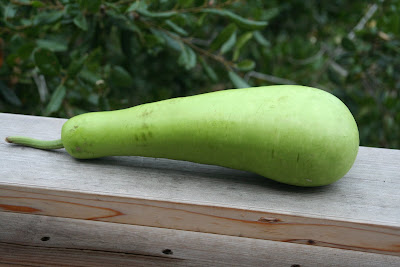 So, Tyra's going to University of Texas, Tim and Billy bought a longhorn steer, Coach got fired, Matt did the wrong "right" thing. We're done with the Friday Night Lights dvds as of last night, thank GOD. Dillon, Texas has seemed more vivid to me lately than my own life, which is pathetic, and I have begun using Tami Taylor as a guide for my behavior, which is fine, since she's awesome, but hopeless since she's an extraverted TV character and I'm an introverted human being. Yesterday, I drove six hours and spent most of the time in a reverie about the Panthers, which is just sad. Very good thing it's cold turkey until 2010.
Up top is an opo squash, bought from the Chinese market. It looks sort of like a pear but tasted vaguely like zucchini and made a pleasant, easy soup when boiled with fish sauce, water, and a tiny amount of pork shoulder. My one complaint is that in her opo squash soup recipe Andrea Nguyen does not call for peeling the squash, as even after extra-long cooking, the skin was too crunchy, like the rind of a gourd. The recipe is here, and I recommend it, though would also recommend peeling the squash.
On the side, I served Nguyen's crispy fried eggplant which was delicious, especially dipped in nuoc cham. 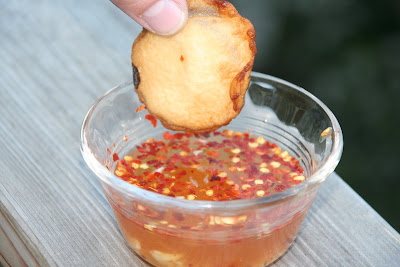 I told the children the fried eggplant was fried potatoes, but in a harried way so I could pretend it was an absent-minded slip, should the fib be detected. No one figured it out, and the kids enthusiastically ate the fried eggplant. This is wrong. Tami Taylor would not tell such a lie.
Posted by tipsybaker at 6/16/2009 09:37:00 PM