Elko is great, but this book is greater 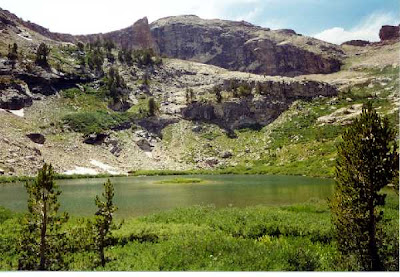 We had an exciting dinner last night at another Basque place, the Nevada Dinner House in Elko. The food was just meh, but at the adjoining table sat a posse of long-haired, fat, middle-aged guys in shorts and tank tops, all of them heavily tattooed. From these elaborate tattoos we gleaned that they are Vietnam vets and one had been a POW. Midway through the meal, one of them stood up, dropped his plate on the table and began complaining loudly that he was being ripped off. He was unbelievably belligerent, tossing his mane of gray hair, glaring at the waitress and saying, "You're tryin' to sell a chicken-fried steak for $30?" He said that over and over again. Eventually the male manager intervened and the party was escorted out. Wild. You don't see much of this in the Bay Area.
The thing is, Mark agrees with him. He thinks the whole Basque family-style thing is a "scam." He calls it "cafeteria-style food at three star prices." It's true, the food isn't that great and it's not cheap. On the other hand, it's local, it's interesting, it's wholesome (vegetable soup, salad, beans with every meal) and the options are Burger King or a casino buffet.
For years I've wanted to hike in the Ruby Mountains outside Elko (see above), which is what we're doing today. Except I started a book I can not put down: Farm City by Novella Carpenter. It reminds me of Barbara Kingsolver's Animal, Vegetable, Miracle but funnier and minus the sanctimony. The author lives in Oakland and raises not just vegetables, but turkey, geese, ducks, chickens, pigs, and bees on the vacant lot next to her gritty, inner-city apartment. It's WONDERFUL and I wish I could stay in our hotel room all day reading.
Posted by tipsybaker at 6/19/2009 07:29:00 AM