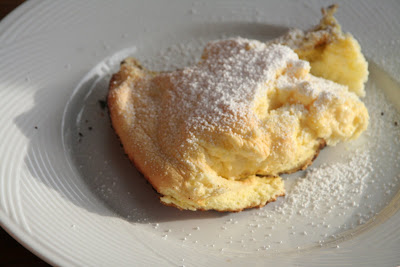 Chickens recycle leftovers that we can't compost or throw into the worm box, like leftover fromage blanc, Vietnamese noodles, and beautiful, not-that-delicious German pancake (see above.)
Since we had such luck with Molly Wizenberg's Dutch Baby a while back, this morning I attempted a variation, the pfannkuchen from the most recent Joy of Cooking. Joy: "Our recipe is based on one by Henrietta Davies, nineteenth century Germany's greatest cookbook author."
Nineteenth century Germany's greatest cookbook author. Nothing on the internets about nineteenth century Germany's greatest cookbook author, which makes her even more intriguing. Aspiring biographers, take note.
Unfortunately, Henrietta's pancake -- which contained four eggs and 1/2 cup of cornstarch in place of flour -- was deemed eggy and "not as good as a pancake" by husband. The children seemed to concur. I wish I could rebut, but since I no longer have a metabolism, try not to eat pancakes. (I'm making buckwheat crepes with salted caramel sauce tonight, and for those will make an exception.)
Anyway, the chickens relished Henrietta's pancake, and I feel less troubled by the waste, which is no longer technically waste. Ok, it's still waste, but not as egregious. 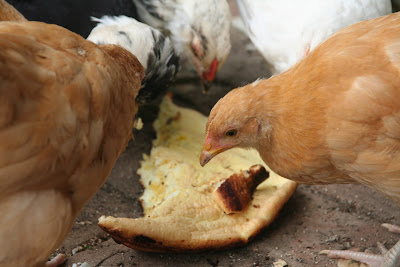 Getting back to the fascinating subject of the worm box. Last year my mother gave me her worm farm which she'd been carefully cultivating  for years. This was one healthy, industrious colony. I used to lift the lid to see a seething, fleshy pink mass of fat wrigglers which was totally grotesque, but also fantastic. I wanted them to thrive and throw off lots of excellent compost, and since I'm definitely a "more is more" person, I fed them and fed them, carried every last coffee ground and cabbage core and crushed egg shell out to my babies. The box got very heavy and wet and oozed pitchers of so-called worm "tea" which I gave to the plants.
Then, over the course of a week, all the worms died. I had smothered them with kitchen scraps. Husband buried the noisome contents in a bare patch in the garden, and a month later I planted some tomatoes right there. The tomatoes have gone completely bonkers. 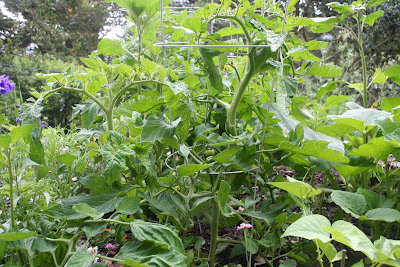 For mid-June in a fog belt, that is bonkers. Note the tiny fruits: 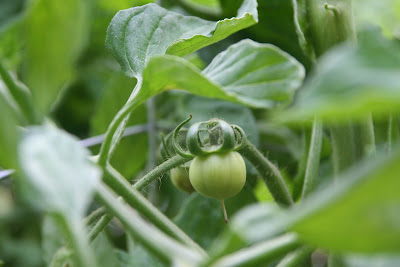 Tomato plants elsewhere in the garden are a third the size with no tomatoes.
You don't have to kill worms to reap the benefits, you can just harvest the "soil" every now and then. I have acquired some new worms and, although it is a struggle, am practicing restraint in their feeding. I will spare you a photograph.
It occurs to me that maybe chickens should not be eating fromage blanc and German pancake, that "more is more" might endanger birds as well. I don't think so, but will check on that.
Posted by tipsybaker at 6/12/2009 07:54:00 AM