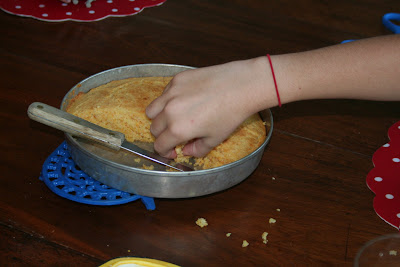 Struggle though it is to wrest my attention from Sarah Palin, I did manage to focus on Alice Waters long enough to make dinner last night.
Cornbread
Ratatouille
Pan-fried pork chops
The cornbread was ravaged by many possum-like hands before I even put the rest of the meal to the table. For the last decade I've only baked sweet, cakey cornbread from an excellent recipe given to me by Mark's grandmother. I was sure no one would like Waters' cornbread (Simple Food) which calls for almost no sugar. I was wrong.
Predictably, the ratatouille (Simple Food) was less popular, though it was pretty fantastic. Ratatouille is a miracle dish, so much more than the sum of its off-putting eggplant/zucchini parts, managing to taste oily and rich without actually being oily and rich. How does that WORK?
Pork chops (Simple Food) were the skinny kind. Tasty and easy. Nothing more to add.
I think I overstated my growing fondness for Waters in my last post. Saturday, when I caught her underwhelming Slow Food panel performance, I was in a semi-traumatized, any-liberal-port-in-a-storm state over the prospect of Vice President Palin. Over the weekend, I was convinced that I was watching a horror movie. Now I'm wondering if it won't turn out to be a comedy.
Only time will tell. Meanwhile, I'm going to try not to let the unfolding political drama affect my judgment on important matters, like Alice Waters and her cookbooks.
Posted by tipsybaker at 9/02/2008 07:41:00 AM