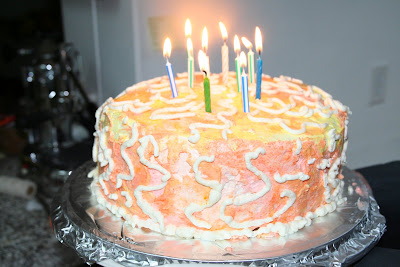 The agony this ugly cake caused me.
Meet "Crazy Swirls," baked and decorated according to the instructions in Liv and Kaye Hansen's The Whimsical Bakehouse, a lively, chatty volume that I bought when I was preparing to bake my sister's wedding cake a few years ago.
I ultimately decided the Whimsical aesthetic -- bright, clangorous color combinations -- wasn't one I embraced. But I kept the book on the shelf anyway, and Owen recently chose it as "his" cookbook. Now I have to make some effort to work from it for a few days.
For the joint birthday party of Owen and his cousin Stella, I made my first Whimsical creation:
1. I baked a walnut caramel cake -- three rather delicious layers of toast-brown butter cake.
2. Made the coffee mousse filling.
3. Broke the extremely friable cake while stacking and filling with coffee mousse. Sad, but fixable.
4. Whipped the egg whites for Kaye's buttercream and "boiled" the sugar syrup for 7 minutes per the instructions. The sugar caramelized. I poured it into the egg whites nonetheless. Hot, brown soup, sloshing around in the mixer. A minute later I poured it all down the drain.
5. I whipped more egg whites for Kaye's buttercream and this time SIMMERED the sugar syrup for 7 minutes. The sugar didn't caramelize. I poured it into the egg whites. Hot white soup sloshing around in the mixer.  A minute later I poured it all down the drain.
6. See #5, but this time instead of soup, I got glossy, sweet, snow-white meringue to which I added a pound and a half of butter in tiny clumps. Beat for ten minutes. If you've never made meringue buttercream, it's a silky miracle. When it works.
7. Crumb coated the cake.
8. Divided the buttercream into five different bowls, and colored each with a different hue on the yellow-orange-pink spectrum, per the instructions.
9. Put blobs of frosting all over the cake.
10. Chilled the cake.
11. With a warm spatula, scraped off the lumpy ridges of buttercream to yield a moderately smooth, piebald orange-pink cake.
12. Decorated with white buttercream squiggles. Voila, Crazy Swirls.
Took to Justine's house, adorned with candles, cut, ate, sent leftovers home with Checka who proclaimed it her "dream" mocha cake.
Mocha cake?
So far, achieving whimsy has been exhausting, expensive, and fattening.
Posted by tipsybaker at 9/29/2008 07:22:00 AM