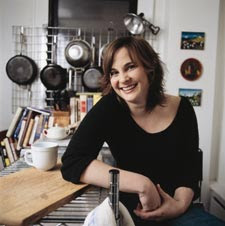 So, the James Beard Awards are tonight and the event will be "live blogged" by the charmingly foul-mouthed Julie Powell, (see left) author of Julie & Julia and the original genius cookbook blogger.
I once interviewed Powell and wrote a cute little story about her, though upon rereading I wonder if it is entirely correct for a writer to use the term "Rabelaisian" without having ever read Rabelais. Thoughts?
I also wonder why Powell can get away with throwing the F-word around and come across as hilarious and hip and I can't. Thoughts?
And who was the bozo who named the Cheesecake Factory? Aside from the Dress Barn, is there a business on this planet with a more unappealing name? Thoughts?
I have definitely had too much coffee.
Tonight marks the end of my 6-week "bakeoff" between the three Beard Foundation nominees for best Asian cookbook of 2007.  I will wearily prepare one more dinner from Fuchsia Dunlop's Revolutionary Chinese Cookbook because I already did the shopping. But for the record, I am not at this moment craving pounded eggplant with green peppers.
I finished reading Dunlop's intelligent, vivid, and extremely impressive book last night. Unlike her fellow nominees,

Niloufer Ichaporia King and Cecilia Chiang, Dunlop (pictured, right) is a professional journalist who gamely set out to explore an intimidating foreign cuisine, one that includes dishes like ox penis hotpot and fried dog. Her prose is topnotch -- crisp, sensual, funny, evocative. She overuses certain adjectives, an occupational hazard I struggle with myself so Lord knows I'm not criticizing. Just saying.
And she did awesome amounts of research, providing fascinating anecdotes and histories of various dishes originating in the Hunan province. As a work of culinary anthropology, Revolutionary Chinese Cookbook is invaluable; as a cookbook, it can be maddeningly nonspecific, the recipes mediocre -- and worse. Apparently, other people who have cooked their way through this book have not had such a rough experience, so it might just be me.
I'll provide an earnest summation of the volume in a bit, with a tally of how all the recipes worked.
However, since the awards will be announced before we consume the aforementioned pounded eggplant, let me project the winner.
I don't think Chiang stands a chance, not because The Seventh Daughter isn't good; it's great. In fact, it's better than Revolutionary Chinese Cookbook, more polished, more consistent. But Dunlop has an exotic hook; she is revered in the food world; she's young; and she has broken new ground in the literature on regional Chinese cooking. She might well take the prize.
But she she shouldn't. My Bombay Kitchen is this year's Asian masterpiece. Hands down.
Posted by tipsybaker at 6/08/2008 08:36:00 AM