The Cuisine of California: Why? 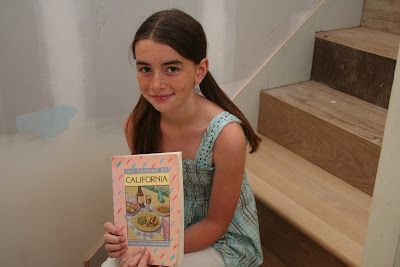 I'll be cooking from The Cuisine of California by Diane Rossen Worthington for the next week or so. To eliminate the hint of tyranny that was creeping into our mealtimes, I decided that everyone should have a turn choosing cookbooks. This was Isabel's choice.

Tipsy Baker: So, Izzy, why did you pick The Cuisine of California?
Isabel: Because I was interested to see what you'd think. I wondered if you would do it, if you would say no, give me something harder, that's not interesting enough. Also, you usually pick cookbooks from places thousands of miles away from here and I wanted to see what these kinds of things tasted like.
TB: Any dishes in particular catch your eye?
Isabel: They all sound good. Also it's sort of normal and it's probably not so spicy.
TB: Do you think our family dinners will be happier now that I'm cooking "normal" food?
Isabel: I think Owen will sit at the table more, though I don't really care if he sits at the table. But I don't think food affects the mood. I don't think anyone will be happier or sadder because it's more normal.
TB: What do your friends eat for dinner?
Isabel: Juliet's mom cooks dinner sort of like you. I know Montana has a lot of pasta and her mother doesn't like to cook. And Emily, I guess they have a lot of meat.
TB: Is there anything I make that you hate?
Isabel: Cheese souffle.
TB: Do you like family dinners?
Isabel: Yes.
TB: Why?
Isabel: Because when you have dinner it gets everyone together around a table and usually people don't get up and jump around. You're forced to be sitting there and that's usually when you talk about things.
Posted by tipsybaker at 6/10/2008 06:32:00 PM