The Cuisine of California: Father's Day 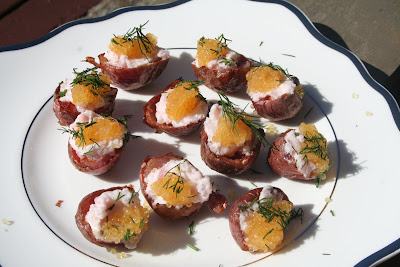 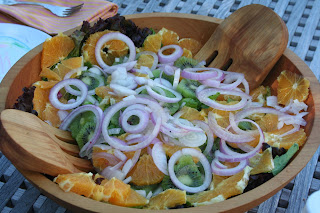 Above are the baby red potatoes with caviar from Diane Rossen Worthington's maddening book. At left, is her watery orange and kiwi salad.
I went to Whole Foods yesterday to buy the ingredients for our Father's Day party in Petaluma. I was standing near the cheese case when I saw a woman -- fortyish, killer white eyelet blouse, pretty hair -- snapping photographs of the olive bins. I thought: A kindred spirit! A friend! She's taking pictures for her food blog!
I asked, "What are you taking photographs for?"
She gave me a dark, sidelong look and said, "Evidence."
My quest for a Mill Valley soulmate is as frustrating as my attempt to find one excellent recipe in The Cuisine of California.
After my encounter with the shutterbug, I bought this rather expensive caviar to put in the little hollowed out new potatoes. As Worthington says, "the caviar garnish adds an elegant touch."
These were fiddly to make -- first you roast the potatoes, then you slice in half, hollow out, brush with olive oil, bake again until crisp. You mash the potato flesh with salt, sour cream and chives, put it back in the potatoes and top with the "elegant" caviar.  I took them to Petaluma. They were liked. They were not loved. After tasting one, Michael actually went to the supermarket and bought an additional appetizer -- barbecued ribs. In a plastic to-go container. Jerk.
How could caviar go wrong?
As usual, Worthington throws a lot of delicious things together and instead of becoming more delicious, they blur. Baked potato with sour cream is earthy, rich, blandly creamy; it puts you in mind of dinner at the Sizzler. I mean that in a nice way.
Caviar is sharp, super-salty, and special. All those little tiny crunchy beads, and you want to savor every precious one of them.
Caviar and baked potato. Together, they are confusing. You want more caviar; you want less potato. You reach for a rib.
The salad was a disaster. Green salad is not improved by kiwi and sliced oranges, weeping watery juice. Fortunately, the burgers supplied by Michael and Justine were most excellent.
And dessert: Almost too sad to talk about. I baked the brown butter fruit tart fifteen minutes longer than Worthington directed, and still, it did not quite set. When I delicately arranged the kiwis and strawberries on top, they sank to the bottom. Soup in a crust.
So, Michael and Justine went out and bought It's-Its.
You can't really beat an It's-It.
Posted by tipsybaker at 6/16/2008 06:06:00 AM

Labels: Cuisine of California
Email ThisBlogThis!Share to TwitterShare to FacebookShare to Pinterest