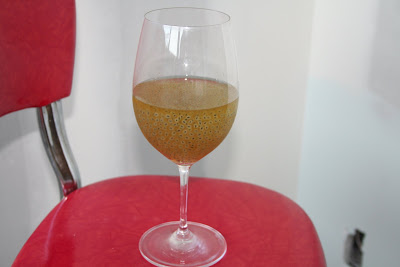 I vowed to post no more photos of hideous beverages, but this basil seed drink was so eye-catching I decided to make an exception. For the full effect, click on the image to enlarge. It's a product of Thailand, purchased at the Richmond New May Wah market. Faintly banana-flavored, sweet, quite tasty. Just think, if I were still pounding Negronis, I would never have discovered it.
The question of the day: Can braised pork belly play a role in a sensible weight loss plan?
No? I feared as much. Last night I attempted Mao's Red-Cooked Pork -- cubes of pillowy, succulent belly meat braised in a thin, lovely sauce of sugar, star anise and cinnamon. It was a much humbler dish than the version I prepared using Cecilia Chiang's cookbook, as would befit the pork belly of a great communist leader. According to Fuchsia Dunlop, Mao was basically a nut for red-braised pork belly. In China, the dish is reputed to enhance both intellect and beauty.
As far as I can tell, it is only enhancing my BMI. But it is indeed very, very delicious.
In other news: Our dinner hour is vastly improved since the construction crew removed various tarps and we can now eat in view of windows, light, the outside world. There have been no tears at the table for the last few evenings, and considerably less cursing. So things are looking up! And as soon as I am done with my unwieldy work project, I think our lives will be absolutely perfect.
Posted by tipsybaker at 6/04/2008 11:30:00 AM