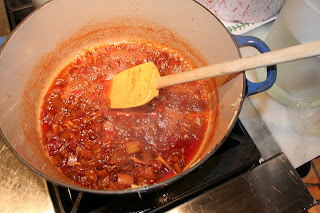 Okay, so my food styling needs some work. That's fiery rhubarb chutney boiling on the stove. Did you know the ancient Persians believed the first man and woman sprang from a rhubarb stalk? Neither did I.

We are down to the last four nights of Parsi fare here at Casa Tipsy Baker. I think we are all ready for a change, though I can't speak highly enough of My Bombay Kitchen, a volume I will bring with me when it's time to hobble off to the retirement home. Personal, intelligent, idiosyncratic, meticulously organized, lavishly detailed. Every recipe has worked beautifully. In this blog I have shrugged off some of the final results, but in fact all of Niloufer Ichaporia King's dishes have been solidly delicious, the kind of food I heat up for lunch day after day.

And, to be fair, King isn't trying to wow us with these recipes. She's trying to preserve the cuisine of her culture and of her childhood -- what her mother cooked, what her Parsi friends cooked, and the food she prepares as a San Francisco "magpie." My Bombay Kitchen is a scrapbook, a memoir, an anthropological treatise, a treasure.
Posted by tipsybaker at 4/29/2008 07:37:00 AM