My Bombay Kitchen: How many calories in a cashew? 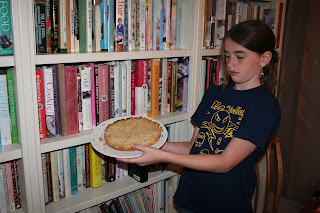 If I could choose any job on the planet, I think it might be "independent scholar." Except, according to the jacket bio on My Bombay Kitchen, Niloufer Ichaporia King has already taken that job. Shoot!

Oh, but wait. . . .phew. Apparently, there are still openings for independent scholars and I guess the fact that I am writing this blog suggests I've already landed one of those plum positions.
I realize that I have given short shrift to King's voice -- sly, mellow, witty, intimate -- which is one of the chief pleasures of her book. Every recipe has a headnote that puts it in context, and makes you want to start grinding cumin seeds. She's kind of funny, too: "There's no argument that a billowy, well-fried, well-drained papad is a delicious thing to eat, but it's impossible to stop with one. If you don't want to be like the universe, forever expanding, a toasted papad is equally delicious."
Checka and Stella came over last night and I managed to (sort of) relax into the multigenerational chaos by imbibing one of King's "sneaky" Pomegranate cocktails -- a lot of bottled juice shaken with a drop of white rum. Sadly, I prefer an unsneaky cocktail that clobbers you from the first sip. Like, say, a manhattan. Up.
As an appetizer snack (why do I hate the word nosh? Also awful: nibble) I made my second favorite recipe from this book so far: Ajwain cashews. The cashews are lightly roasted ("Coppertone tan is too brown") then tossed with ghee, salt, and Ajwain seeds.
Unfortunately, after eating approximately 10,000 cashews, the meal that followed was anticlimax: Duck legs braised with little onions and Chopped watercress salad with ginger vinaigrette. Solid recipes for very pleasant dishes that I will probably never make again.
I would be raving about the crumbly, buttery, cardamom-flavored Giant cookie (pictured above) if I hadn't recently eaten King's Cardamom cake, which remains the Parsi dessert to beat.
Posted by tipsybaker at 4/24/2008 08:41:00 AM