My Bombay Kitchen: The Spice is Right 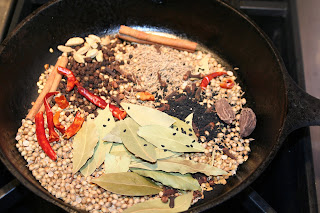 Just some of the components of Dhana Jiru, the spice mix from Zoroastrian Hell.

My ostensibly low ambition for last night was to whip up Niloufer Ichaporia King's Split chickpea stew, which looked easy and vegetarian and virtuous.
But she calls for two elaborate spice mixes: Sambhar Masala, which includes eleven individual spices, and Dhana Jiru, which calls for seventeen, among them a "strand" of mace and a cup of coriander seeds. Toasted.

I mixed myself a drink.

Three hours, two drinks, and 10,000 Ajwain cashews later, we wearily sat down to dinner. I had also made Puris (impressive!) and Braised greens (bitter!)

The chickpeas? I was hoping that all my toasting and grinding and sifting and sneezing might yield a revelatory chickpea. These were good, but no. I'm not sure revelation can ever be found in a chickpea. And I say this as one of the chickpea's biggest fans.

But here's my real problem: King's proportions for these spice mixes are so generous that even cutting the recipes in fourths, I have enough Dhana Jiru and Sambhar Masala to tide over a tubby Parsi family of seventeen for a decade.