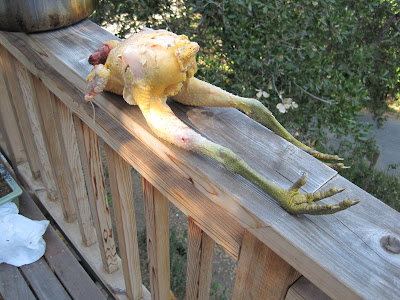 In a San Francisco Chronicle article about urban homesteading earlier this week there was this quote from a woman who raises her own livestock in Berkeley:
"The level of appreciation for nature and life when you slaughter your own meat creates a kind of ethic that I think is what we need to save the world. That's why I do this -- I want to live with a deep gratefulness and appreciation for what the world provides me."
This passage -- which I read in the wake of Arlene's slaughter -- made me want to pave over our garden and get a Costco card.
Let's start with sentence one, in which the woman (who is probably very nice, sorry to jump on her passing remark to a reporter, but I must) asserts that if more people regularly slit the throats of animals it will "create a kind of ethic" that is going to "save the world."
I know what she's getting at in her fuzzy way. She's suggesting that if we take less for granted, if we understand the cost in blood of every burger, if we are more in touch with the realities of food production, we will be better, more soulful people.
A nice idea and complete nonsense.  Throughout history people have slaughtered their own meat and also slaughtered each other. Moreover, the places in the world where people regularly butcher their own animals today are places those of us accustomed to democracy, universal education, and clean drinking water would prefer not to live. Slaughtering your own meat is not barbaric, but it is not ennobling. It's like snaking your own toilet.
Now, sentence two. More well-intentioned nonsense. Slaughtering, plucking, and trying to choke down Arlene gave me "a deep gratefulness and appreciation" for what grocery stores provide me.
Enough preamble. Here's the story of our chicken-slaughtering. Please skip this if you're highly sensitive or tender-hearted.
Husband and I woke up the morning after we came back from Guatemala and heard crowing from the henhouse. One of our hens turned out to be a rooster, and boy chickens are not allowed in this town. We went out, identified the crowing bird -- it was brawny, butchy Arlene, what a surprise -- who continued to crow intermittently throughout the day.
My father, who worked at a slaughterhouse in high school, came over in the late afternoon. Owen helped us catch Arlene, then went upstairs and turned on the TV really loud.
I placed Arlene on a tree stump and held him down while my father put the bird's neck between some sharp garden shears and took off his head. Arlene thrashed for about 25 seconds and then went limp. My hands were covered with blood.
I wasn't sure how I was going to feel -- I've never intentionally killed a living creature more evolved than a Dungeness crab.  I didn't feel bad, and I didn't feel good. I didn't feel empowered and I didn't feel enlightened. I felt nothing. He was a chicken. I washed my hands. Critics often suggest that here in the United States we don't appreciate the connection between the living animals that run around and the shrink-wrapped filets at Ralph's. I used to accept this on faith, but after killing Arlene, I no longer believe this is true. As it turns out, I understood the animal-meat connection perfectly from the get-go.
We hung Arlene upside down for an hour in a garbage bag to drain his blood while we had dinner. Then I boiled water, dunked him in there for a minute, and plucked him. He smelled like wet cat. Plucking was both messier and easier than I'd anticipated -- the feathers came off in fistfuls, but they stuck to my hands, which was annoying. I also pulled off big chunks of skin, which made for a really ugly chicken carcass. See photo at top.
After plucking, I sliced open the body and scooped out the innards -- puffy intestines, liver, tiny heart. This took about three minutes. Some undigested grain spilled out, and this did make me a little sad. Arlene was cut down in his prime with a gullet full of cracked corn. Poor guy. I rinsed him off, placed him in the fridge.
Yesterday, I put him in a pot with an onion and some water. 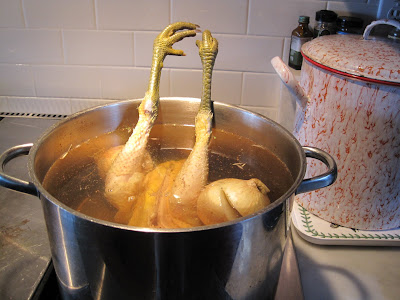 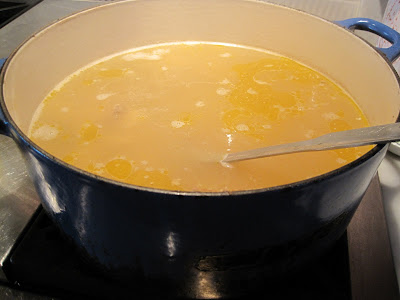 Now, we get to the mysterious part of the story. I understood there was going to be a problem when I kept postponing tasting the broth for salt. It dawned on me that I really did not want to eat this soup.
But I tasted it, salted it, added lemon and egg (avgolemono), served it.
The kids were surprisingly unfazed. Owen ate quite a bit, Isabel ate the broth and rice, but avoided the meat. My husband would not touch it. I sort of wanted to show him up, but why be a bitch when you don't have to. It was delicious soup and I would have dumped it down the drain if no one was looking.
I'm still trying to figure out why I was so repulsed by this soup. I have some thoughts, but also some non-butchering work to attend to this morning. More later.
Posted by tipsybaker at 8/21/2009 07:29:00 AM