Beer margaritas from the other Tipsy Baker 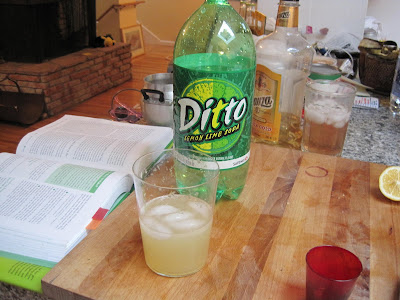 A few days ago, someone alerted me to this blog, and my first response was to sneer the "perfect margarita" recipe because it contains beer and frozen limeade.
I was subsequently chastised for snobbishly dismissing a drink I have never tried. Point taken! Last night, my sister hosted a party for our grandmother, a Guatemalan party about which I will have more to say later. Among my contributions was a pitcher of "perfect margaritas."
To make this unconventional drink, you mix equal parts frozen limeade concentrate, beer, tequila, and lemon-lime soda. Serve on the rocks.
How were the margaritas? They were great and fizzy and they were also easy. The beer cuts the sweetness of the limeade and soda pop, and somehow it all balances out very nicely. I should add that these are not as potent as "proper" margaritas, which was a blessing given how hot it was yesterday, how distraught I was about that bobcat, and how many of them I drank. This is an excellent recipe for a big party.
That said, I did not think these margaritas were quite as delicious as those made with Cointreau and fresh lime juice. They don't have the  complexity and sharp, sour edge you can only achieve with top-shelf liquor and the laborious slicing and squeezing of many limes.
As for the bobcat, it's like Straw Dogs around here today. We've got bricks piled up on the deck to throw in the event of another incursion, which we have been told to expect.
Posted by tipsybaker at 8/29/2009 08:12:00 AM