As opposition research, I may have to try an Uncrustable 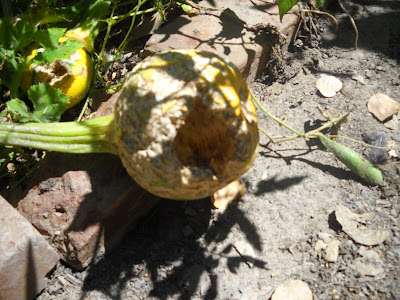 That is a baby pumpkin gutted by our chickens, who are now relegated to the lower yard. I've decided to do some fall/winter planting in the patches where summer planting was trampled, eaten, inadequately staked, or died. Unlike Charentais melons, fava beans have never failed me.
We had banh mi again the other night, and husband and I agreed that twice was enough. It's like making corn dogs at home -- you can do it, but the magic is in the associations. Corn dogs: county fair. Banh mi: urban hole-in-the-wall.
For dessert, we enjoyed some Hershey's bars while polishing off the last three episodes of season 1 of Damages (I told you we were going to seed!) and I must say, Hershey's bars are exceptionally tasty, as tasty as almost any cake I have ever baked, plus cheaper and easier. I don't even like chocolate.
The meal got me thinking. Making those semi-elaborate sandwiches and unwrapping that candy bar took about 7 minutes of what food magazines call "active time." Making lunch earlier in the day (sandwich) took about 1 minute. "Making" breakfast (cereal, peach, coffee), took another minute. My husband took about 1 minute on his lunch (sandwich) and 1 minute on breakfast, so total household food prep time yesterday: 11 minutes. This is 16 minutes less than the American average, which is a "mere" 27 minutes, per Michael Pollan's big, scoldy story in the New York Times Sunday Magazine about the rise of cooking shows and the decline of cooking.
Here's the thing: Twenty-seven minutes actually seems to me like a lot of time to spend cooking, particularly if you don't have children around, if you have a demanding job, and/or you don't enjoy the process. If you're happy with a quesadilla or some cottage cheese or a Vietnamese sandwich and Hershey's bar, why knock yourself out? Because Michael Pollan says you should?
To illustrate the sorry state of affairs in our kitchens, Pollan alludes to the atrocity of frozen peanut butter and jelly sandwiches. A preposterous concept that struck me at first as an extreme example. I've never met anyone who ate frozen peanut butter and jelly sandwiches, I've never even seen this absurd product.
Now I have. 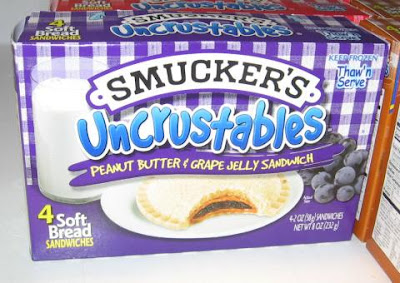 One look at that photo and you know Smuckers pumps psycho ingredients into those creepy-looking flying saucers that will make children crave them.
Still, the homely 50-second act of slapping together a peanut butter and jelly sandwich strikes me as akin to pouring your own juice, brushing your own teeth, wiping your own. . . . Hiring it out feels corrupt. Is this a line a lot of Americans are really crossing? Seems impossible that Uncrustables will ever become as popular as Eggos and canned soup, which really are incredibly convenient. Or so I've been told by lazy people who don't love their kids.
Then I did a few minutes of research on the internet. Uncrustables are a big hit! People are cheerfully crossing that line.
I forced myself to try to come to grips.
If frozen pb&j
a. is just as cheap as homemade
b. contains the same (possibly very crappy) ingredients as a sandwich you'd make yourself and offers the same nutritional value
c. tastes good
why not?
If you're already using Jif, Smuckers, and Orowheat, there seems little point in fetishizing the assembly.
But, but, but there's TOTALLY a point in fetishizing the assembly.  If you buy Uncrustables, a corporation decides how much jam, and how much peanut butter, and removes the possibility of marmalade, or Marshmallow Fluff, or a crust. The idea of people ceding that last, trivial bit of control over what they put in their mouths makes my skin crawl. It made me ashamed that a few days ago I was cheerfully eating Hershey's bars, wondering why I ever bothered to bake. Hershey's engineers its candy to be wickedly delicious and produces it in a factory using cheap emulsifiers. I fell for it like a ton of bricks while watching a crass and addicting TV show of about the same caliber. From now on, only scratch cakes and Elizabethan poetry.
Back to Pollan's piece, since I'm in a mood.  There was a line that tripped me up: "The time and work involved in cooking, as well as the delay in gratification built into the process, served as an important check on our appetite."
I know what Pollan is getting at -- if you make coq au vin and salad for dinner, you're probably going to be slimmer than if you grab a bucket at KFC. This is true. But it's not the act of making coq au vin that accounts for the difference, it's the decision to make coq au vin in the first place and the values (moderation, balance, discipline, health) that go along with it. If my experience is any guide, the time and work involved in cooking do not check the appetite -- they sharpen it. Delayed gratification whets it. If Pollan had just used the word "food consumption" instead of "appetite" I would have no quarrel with this sentence.
There's lots of interesting stuff in the story -- about food TV, about Julia Child, about the horrifying Uncrustables -- and I agree in the main with what Pollan has to say, obviously. Obviously!
And I buried the lede in this muddled diatribe: Isabel and Owen are home, which is GREAT.
Posted by tipsybaker at 8/05/2009 06:32:00 AM