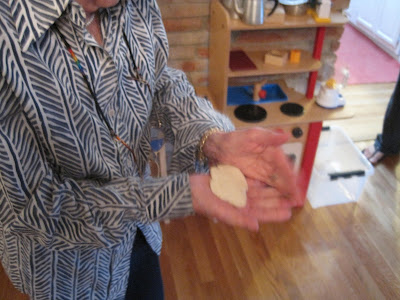 That's my grandmother, making tortillas the old-fashioned Guatemalan way. She eschews the tortilla press, which is for inferior cooks, lazy cooks, Mexican cooks.
These are fighting words, but my grandmother, who is Guatemalan, doesn't read my blog so I am going to say it: Guatemalan food is just like a regional Mexican food. Refried beans, tamales, tacos, tortillas -- it's all the same, just different shapes and colors. Am I wrong? I am right.
For the Guatemalan-themed party my sister threw last week, I contributed chirmol made by charring tomatillos, tomatoes, and garlic, which I then pureed in a blender. 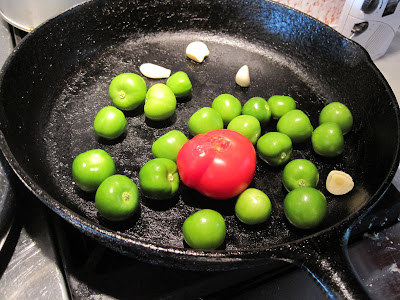 Tomatoes and tomatillos from our garden. Gold star for me. How is this not salsa? This is salsa.
I also made a sweet potato pudding which involved stewing the sweet potatoes with honey, cinnamon, butter, milk, then mashing the mixture and topping with toasted cookie crumbs. 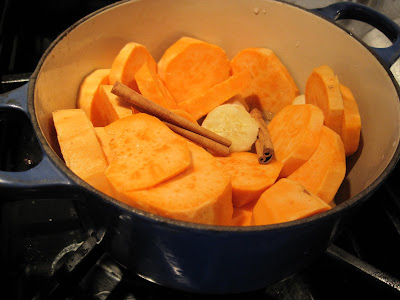 It was tasty, creamy, and fairly healthy, for a dessert.
Then I made -- or tried to make -- huevo chimbo, which my grandmother has always talked about with such longing.
First I beat 12 egg yolks until light and creamy and poured them into a brownie pan. 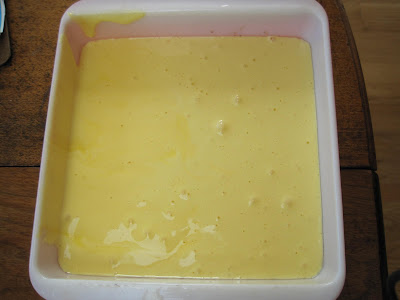 Then I baked it until it was puffed and firm 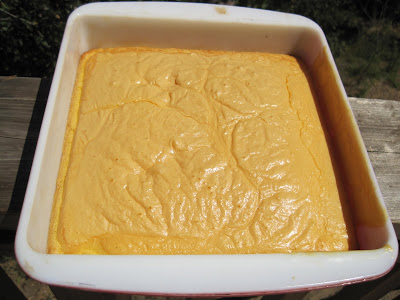 and cut into strips. 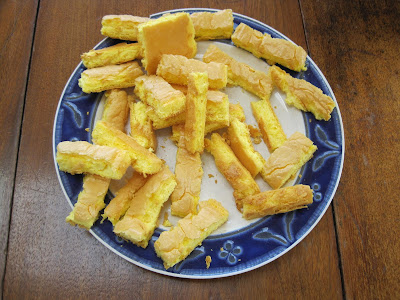 Cruel joke. They look like yummy lady fingers but are actually baked egg yolk.
At this point, you briefly dip the egg strips into a hot spiced syrup to which you have added currants, prunes, and liquor, preferably good quality liquor. 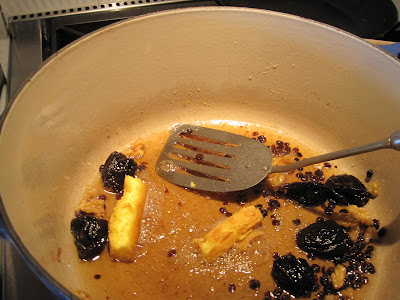 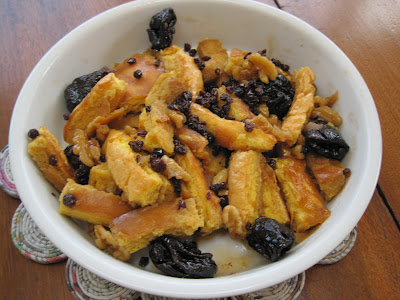 A few weeks ago in Guatemala I ate huevo chimbo that was firm, rich, moist, and unforgettably delicious. This homemade huevo chimbo was not like that. It was like French toast spiked with cheap sherry.
My sister did most the work for the party. First of all, she hosted, which is the hardest part. She also grilled the steak, fried the chorizo, steamed the tamales, mashed the black beans, and made awesome chancletas -- a pudding of chayote served in the hollowed-out shell of the squash-- that you can see in the foreground of the picture below. 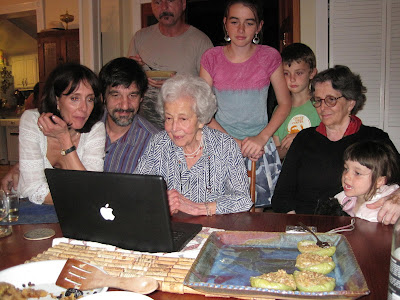 After the meal, my grandmother spent two hours looking at pictures from our Guatemala trip on Justine's computer. I sat in the corner drinking margaritas and thinking about the bobcat.
We have seen no trace of the cat since Friday. I am hoping it has been hit by a car.
Posted by tipsybaker at 8/30/2009 11:24:00 AM