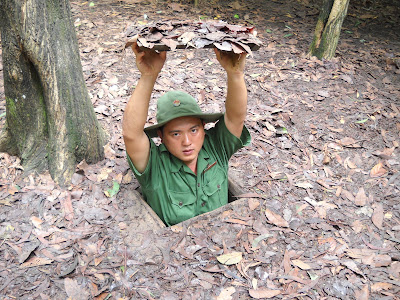 It's a running "joke" in Vietnam that Westerners are big and fat. I've heard some variation on this "joke" a dozen times and we've been here less than 48 hours. Okay, okay, so it's true, but is it really nice to say it all the time? Is it even funny? Don't giants have feelings too?
We went to the astonishing Cu Chi Tunnels today. It's profoundly strange to think that a significant and sad piece of American history transpired in this sweltering, beautiful, water-logged jungle crawling with massive centipedes. Forty years later, it seems unbelievably random.
Anyway, the tunnels. They're this mind-boggling network of TINY tunnels in which the Viet Cong soldiers traveled, lived, hatched battle plans, steamed tapioca, and devised awesome, hideous traps to maim and kill enemy soldiers. There's an extensive display of these ingenious traps with their sharpened bamboo spikes for impaling human bodies. American bodies. It's hard to know what to say when the guide gently asks you what you think. "Impressive" is probably the best answer.
Again, I digress. The tunnels. So, a guide got into one of the tunnel hatches to show us how the heroic VC used to slip down into the earth to evade the Americans. See above. Here's what it looks like an instant later, after he submerges himself and pulls the cover down: 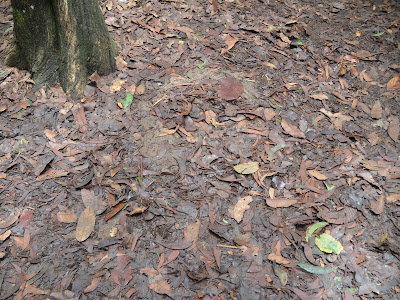 Amazing.
After he got out, we were encouraged to try it for ourselves. Reluctantly, after much cajoling, I climbed into the hole. And then I couldn't get out. It's not like I was STUCK, people! I just don't have the greatest upper body strength and I was in there up to my armpits. So another guide had to give me a little pull and then he made a joke to the crowd:  "Too many hamburgers!"
Hilarious!
Jerk.
Posted by tipsybaker at 7/18/2009 01:13:00 AM