I could get used to this coffee 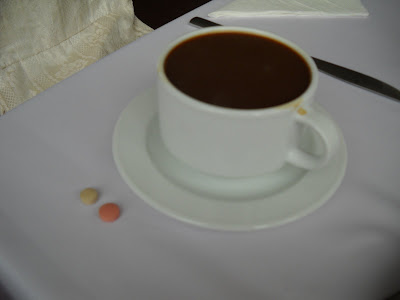 Our guide, Phung, has informed me that authentic weasel coffee -- coffee brewed from beans that have passed through the digestive tract of a civet -- is all but impossible to find anymore. I haven't given up my quest, but in the meantime we're drinking a lot of the regular Vietnamese coffee, which is some of the thickest, inkiest, richest coffee I've ever encountered.  The cup above was poured half full of coffee, thinned with hot water, then "lightened" with milk. It's still tar.
We're in the city of Buon Mi Thuot staying in a huge, brand-new pink hotel where we appear to be the only guests, which is a bit creepy. But the rooms are very international and posh, so it's possible to pretend you're anywhere. Like closer to home. I'm homesick!
But having a wonderful time.  Yesterday was spectacular. 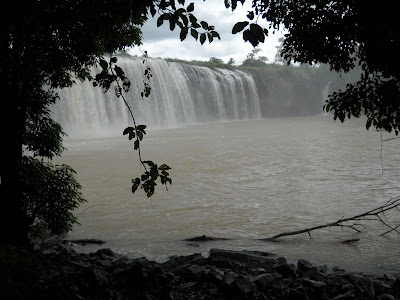 On the 5-hour drive from Da Lat to BMT we saw waterfalls, rainforest, mountains, durian trees, rice paddies, water buffalo, coffee plantations, villages, markets, a lake, countless long-legged chickens. Dogs. Lots and lots of puppies and dogs, which appear to be both livestock and pets. Phung offered to take me to eat dog, but I don't feel the need.
Dinner last night: grilled goat and hot pot. There were geckos running all over the wall and occasionally shrieking, or chirping, or whatever that sound they make is called. At one point, the waiter brought out a kitchen scale and put it on the terrace floor next to a neighboring table. Then he brought out a live turtle and placed it atop the scale. The turtle kept crawling off the scale and the waiter had to grab him and put him back. After three or four tries the waiter and the diners agreed on a weight and a price, and the turtle went back to the kitchen. We didn't see his second act.
Today, we drive to Pleiku, where my father was stationed in 1967.
Posted by tipsybaker at 7/21/2009 02:19:00 AM