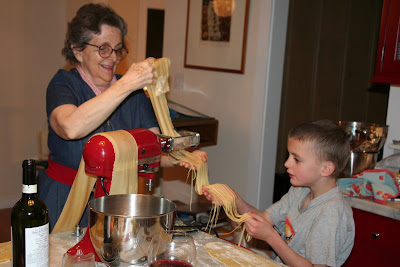 That's my sweet, zany mother feeding pasta into the machine last night. She is also author of this lovely email I received today:
"Checked TB to comment on last night's delights and you hadn't written yet. The tagliarini was truly amazing. I think you are turning me into a foodie. I loved the unique texture, the lemony sauce, the lightness. We do a great job with that pasta.
"On the dessert, which I thought about after (as an emerging foodie), I think the problem was that it was just plain bland. Not bad, not unpleasant, just no character. Not nutty, not rich, not sticky, not creamy.
"Just started some sourdough bread this morning and wondered whether you should consider doing a 'sourdough thing' at some point. Just an idea."
And a fine idea it is, Mom.
But you need details on what we ate last night. We made tagliarini, a super-skinny egg noodle much like spaghettini, for which -- to atone for recent tuna extravagance -- we prepared an ascetic sauce (from Lynne Rossetto Kasper) with ingredients already on hand: lemon, anchovies, parsley.
The lean sauce, as one would expect, was no great shakes, but the pasta itself -- like satin! I just consumed some leftovers cold from the fridge and they are almost as dreamy the next day. You do not get results like this from factory-made pasta, and don't let that bossy Marcella Hazan tell you different.
The "bland" dessert to which my mother alludes: Kasper's hazelnut zabaione with warm chocolate marsala sauce. 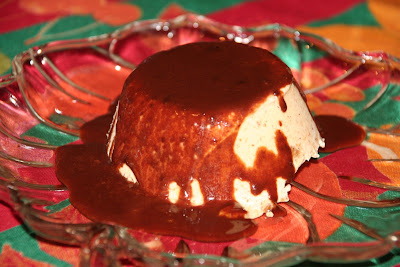 Sounds and looks luscious, doesn't it? Isabel and I were hoping this would resemble the crazy delicious semi-freddo of the other night. But no. Our labors were rewarded with an inert block of hazelnut cream overwhelmed by harsh chocolate sauce. Typical overbearing chocolate behavior. Sheesh.
Don't know how much longer I should stick with The Splendid Table, which is an absolutely stupendous cookbook, in case you were wondering. While there are several dozen more recipes I want to try, next week makes a natural stopping place. (Business trip.)
So, what next? Rachael Ray? Ina Garten? A Platter of Figs? Sourdough? If there's a cookbook one of you is liking  (or disliking) it would be fun to collaborate. I get lonely doing this all on my own.
Posted by tipsybaker at 1/15/2009 06:03:00 PM