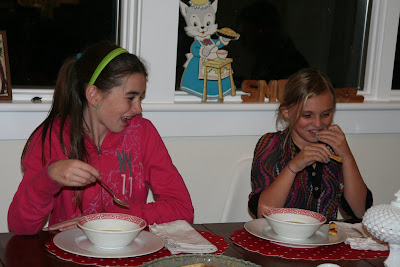 They're hard to please those 6th grade girls, especially when they're together. I don't even try anymore because I know that after Isabel and J. poke at their dinner and look wan and grim and ask to be excused, they go get out their secret stash of crappy candy which they eat all night while watching Grease on the portable player. I know, because I find the wrappers on the floor of Isabel's room every Monday morning. When they don't have any candy, they have been known to pull out the baking chocolate. You can see the toothmarks. Why even try?
But of course, when you stop trying -- when you stop caring -- that's when you succeed. The girls were unexpectedly enthusiastic about Friday night's little tile-baked hearth breads and garlic soup Brisighella. Also, I served dinner late because I was sitting around drinking martinis with J's mother and everyone was sort of shocked and worried that hot food wasn't on the table at 7 o'clock sharp for them to disdain.
Let's start with the little tile-baked hearth breads. You make a basic yeast dough, let it rise all afternoon, roll it into twenty little pancakes and cook slowly in a hot skillet. Lynne Rossetto Kasper includes a recipe for a "condimento" made of finally chopped raw pancetta, Parmesan, garlic, and rosemary to put atop your bread.  Some of us ate the hearth breads with the ravishing condimento (you can guess who), others ate them plain. The next morning when I got up looking forward to leftover hearth bread toast, I discovered they had all been consumed. 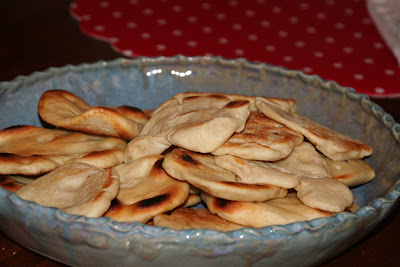 That is unusual and a mark of great success hereabouts.
The soup was one of the best recipes I've tried from The Splendid Table. "This cross between a soup and a creamy puree is as healthful as it is delicious," Kasper writes. "An old Romagna cure for colds, the soup has been fed to babies and the elderly for generations."
I can see why.  You poach two whole heads of garlic in water, peel, add them to a pot of homemade stock along with some onions, olive oil and sage leaves. Cook a bit, puree, and you have a rich, and  soothing elixir unlike anything I have ever made before.
I am still on a frozen dessert kick  after the recent success with semi-freddo. Kasper says her recipe for frozen chocolate pistachio cream comes from Eletta Violi, who owns a trattoria in the Parma hills: "A blooming rose of a woman, Eletta is as generous as her food." 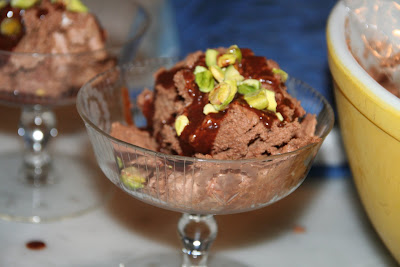 Wouldn't it be nice to be described as a "blooming rose of a woman," live in the Parma hills, and invent recipes like this amazing, airy mousse?
Alas, after the martinis I was an old, wilted carnation. Evil, chilly vodka. I hate you vodka. Yesterday, I never got dressed and lay on the bed all day drinking water, complaining about my headache, and reading a book. Fortunately, it was a really good book. I'm going to finish it right now and then get dressed because today I might actually be a blooming rose of a woman.
Posted by tipsybaker at 1/18/2009 07:27:00 AM