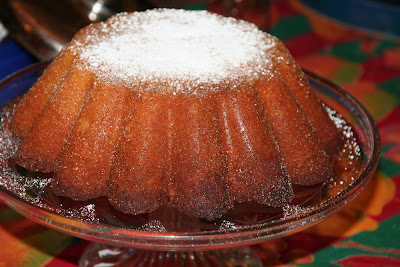 Still feeling peaked from the flu, I didn't have appetite or energy to cook from The Splendid Table last night. I'll be back on task shortly.
Instead, I made my favorite chicken soup, which is avgolemono, the recipe for which comes from Diane Kochilas's Food and Wine of Greece. I've made this soup a dozen times and hew to Kochilas's simple rules, though I add extra lemon juice. You poach a whole chicken for two hours, strain, discard bones, add meat back to broth along with a cup of rice and cook until the rice is tender. Add two eggs and the juice of 2 (or 3 or 4) lemons and whisk until creamy.
My mother never made this soup. In fact my mother never made chicken soup at all, unless it was Lipton's. Her restorative soup for the ailing was an unusual potato soup strongly flavored with olive oil that came from Guatemala by way of my Guatemalan grandmother. Now that I am typing this I realize I should do a post on that soup, and will. But where was I going with this? I was talking about avgolemono soup which I find extremely comforting, although I am not Greek. A cross between soup and porridge, full of rice and soft chicken, it is neither challenging nor spicy, but because of the lemon juice, never bland.
I also baked a honey cake, after craving cake all day long. The words "honey cake" are so beautiful I can't get banish the luscious image they call up, even though all the honey cakes I've eaten have been disappointing, tasting like slightly tough spice cakes.
This one -- from Heirloom Baking with the Brass Sisters -- smelled like honey as it was baking, and tasted powerfully of honey. Perhaps too powerfully. The recipe calls for "mild" honey but I only had amber-colored wildflower honey.  No shrinking violets, those wildflowers! Quite an amazing cake. I just had a small slice for lunch and have never tasted anything quite like it. I think I love it, but I'm trying to figure out how much.
Posted by tipsybaker at 1/07/2009 09:25:00 AM

Labels: Heirloom Baking with the Brass Sisters
Email ThisBlogThis!Share to TwitterShare to FacebookShare to Pinterest