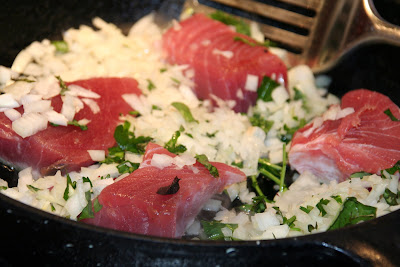 Listen, I know tuna is expensive. I know it should be expensive. But who are the people I live and walk among who are buying ahi at $24.99/lb?
Ordinarily, Whole Foods has a cheaper tuna option. I tried this once and the fishmonger warned me it was not to be "seared" but cooked all the way through. I hate to think why, but that was the plan, so no problem. That was the plan again yesterday, except when I got to the fish counter there was only the fancy "searing-grade" ahi. Rather than change the menu (uh, rigid?) I bought it. From the moment I was handed that tiny piece of fish wrapped in brown paper, I felt like a sucker.
Lynne Rossetto Kasper's recipe for tuna Adriatic style is fine, a basic formula for a quick saute of fish with tomatoes, onions, and olives. The tuna, however, was awful, fishy in the bad way. A friend told me I could have soaked it in rice vinegar to take care of this problem, but should you really have to doctor such expensive seafood? It would be interesting to return to Whole Foods today and see if I could get my money back. But what if there's a scene, or even just an embarrassing exchange, and I can never shop there again?
Here's the happy news. I also made Kasper's oven-roasted radicchio, for which I had the lowest of expectations. (I'm scraping the barrel, as we're coming to the end of the vegetable recipes in The Splendid Table.) You toss radicchio with olive oil, salt, and pepper, then roast for an hour, which magically turns a tough, bitter, and crimson vegetable into a crispy golden delicacy. The outer leaves acquire the papery texture of a wasp's nest while the cores become meltingly soft and the flavor is that of a fried artichoke. It was quite incredible and almost made up for the tuna fiasco. 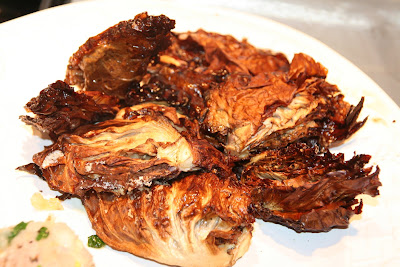