This is our last hour in the high-altitude, non-jungle part of Peru before we spend a few days at a lodge where they turn on the electricity only sporadically and we will sleep under mosquito nets in a world of tarantulas, caimans, malaria, and sloths. After that: home. To summarize our visit to Andean Peru, focusing on the food:

-I wasn’t going to eat guinea pig, but when it appeared as a confit on a menu, I had to order it. Rich oily, salty and gray, it could have been duck or rabbit. But it wasn’t. After a few bites, I gave up. I had a guinea pig when I was 12. Her name was Esther. We went to a pizzeria last night that served a guinea pig-stuffed calzone, but I was able to resist.

-pizza. Lots and lots of very good pizza in Peru, usually baked in a cob oven. Cob ovens are everywhere.

-starches! A typical plate in Peru contains both rice and potatoes. Sometimes corn, too. There is also a lot of bread and while it is freshly baked, it is very bland. I have encountered few green vegetables and have begun to crave them. I’m definitely fatter than when we came.

-The local cheese resembles fresh mozzarella in its texture, but it's salty and it squeaks when you eat it. We’ve had it cold, melted, grilled, chopped up in soup, and folded into empanadas. I love it.

-Choclo is a very pale, beautiful, fat-kerneled corn-on-the cob that is sold straight out of pots of boiling water on the street and I regret that I never got around to tasting it. Nor have I eaten ceviche or drunk a pisco sour.

-Coca. Peruvians swear by the curative properties of the coca leaf and use it in tea, cookies and candies. It doesn't make you high. I drank coca tea and it was fine. I ate a coca cookie and it was a waste of cookie calories.  Peruvians say coca cures altitude sickness, but the only thing that helped Owen was the prescription drug we brought with us. 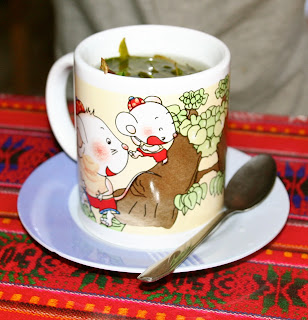 -Speaking of Owen, he has been an excellent companion. Our only conflicts have involved his iPod touch. He starts playing a game and can’t stop and I have to rip it out of his hands to get him to leave the room. Also, I can get frustrated by his eating habits. At meals, which I spend the whole day looking forward to, he hunches over his plate and devours everything within 3 minutes and then says, “Can we go now?” Even so, by far the best part of the Peru trip has been his company.