In the land of potatoes 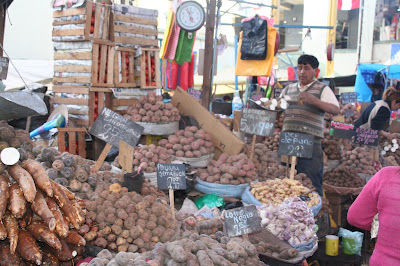 There will be a short hiatus from Time-Life cooking as I do some traveling inspired in part by those very books many decades ago.

It's the time of year when Owen and I take an ambitious vacation. Or at least this is what we did the last two summers and since we both have quasi-sacred memories of those trips, there didn't seem to be any reason not to try again. In fact, it seemed wrong not to. We are in Peru.

Do you know how many foreign nations I had visited when I was Owen's age? Zero.

I hadn't done any research on Peruvian food (too busy with flummery?) and it is . . . my storehouse of adjectives is failing me. I've wasted "outstanding" and "superb" on things like flummery and what's left for the otherworldly cuisine of Peru? We're in the city of Arequipa, famous for its cooking and rightly so. I've eaten peppers stuffed with ground meat, olives, and local cheese and at another meal a dish of potatoes covered with a creamy sauce in which there were small chunks of fresh cheese. Both dishes were wonderful and unlike anything I'd ever tasted and I've tasted a lot. For lunch yesterday, Owen ordered guinea pig, a specialty of the town. You can get it fried whole and gruesome, but we went to a restaurant where they serve it demurely sliced on bowl of quinoa and he ate with gusto. (I was willing to forgo cuy, but he was not, one of many examples of my senescence and his surging vitality.) I ate a bowl of chupe de camarones, the local shrimp soup, and the serving was so huge I thought I'd leave an embarrassing amount but predictably to anyone but me, I ate every bite of the rich pink broth, the giant prawns, starchy corn, sweet winter squash, and floury potato. That was lunch. Dinner was unthinkable.

There is so much more to report, but we're momentarily leaving on a long drive up into the Andes. I've read far too much about altitude sickness for my excitement to be unmingled with dread. Sometimes I think I must prefer it that way.