The highs of this Peru vacation are very high and the lows are quite low, but at least those lows are interesting. In this case, more interesting than the highs. The highs are as follows: terraced landscapes, quinoa cream soup, creamed quinoa, quinoa pancakes, vicunas, embroidered textiles, alpacas, Inca ruins, giant hummingbirds, Arequipa.

Let me assure you the good outweighs the bad and I should write about the good in more detail and there is some good woven into the perplexing day I'm about to describe. But mostly it's not good. If you have come here just for cooking, please don't read any further.  My mother would have said, "No one wants to read things like that, Jennifer!"And some of you won't.

There are also distasteful pictures.

Lake Titicaca sits on the border between Peru and Bolivia and it is a beautiful, big lake with many islands. Among these islands are roughly 50 manmade floating islands that are home to the last of a  pre-Inca people called the Uros. Many centuries ago the Uros figured out how to build mobile islands out of reeds and they moved, en masse, on to the lake to escape their enemies. They built houses on these floating islands and lived on fish and waterbirds. Some still do. Sort of.

There are tours to these islands and who could resist? The travel literature makes the islands sound fascinating, if touristy.  Apparently, some Uros just come over in boats and act out the traditional lifestyle for visitors. I was prepared for the fake and touristy.

But as we motored out of Puno harbor, our guide assured our group of 20 that the island we were visiting was more authentic than the tourist traps we might have read about.

And I believe him.

This nameless island was further out in the lake than the others, about an hour out from the harbor. The boat pulled up to a floating mass of reeds about the size of, I don't know, a basketball court. Maybe a little bigger. On this mat sat a handful of reed huts. It was one of the strangest things I'd ever seen and I thought it was pretty cool as we stepped out of the boat onto the spongy bed of reeds. You could feel the ground sink under your feet. We were greeted by a group of maybe 15 beaming Uro men, women, and children. All of the women were enormously fat and all of the men thin. I don't understand that. Their clothing was noticeably soiled and you could take that in at a glance. One of the men gave a little presentation about how they build the islands (way over my head) and then we were free to roam around, ideally to purchase some of their overpriced weavings that I do not believe for one second were made on the island. But who cares where they were made. That's beside the point.

In the quadrant of the island dedicated to food preparation, there were some large gray waterbirds tied to a wooden cage and more birds inside the cage. According to the tour guide, they are a variety of kingfisher, the eggs of which the Uros eat. 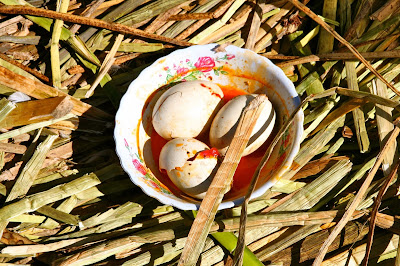 The stench in the area was powerful and deeply, deeply wrong. An Italian woman and I stood looking at a seemingly abandoned tub of potatoes half submerged in murky liquid along with some mysterious smaller tubers. Or something. 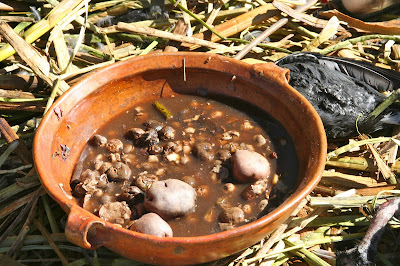 Beside them lay a dead, fully feathered bird and nearby a brace of plucked, rotting birds, probably the source of the odor. Tourists were walking over and around the birds. 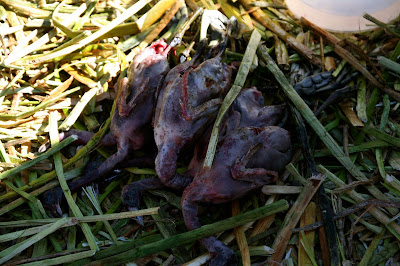 An energetic small child was playing nearby and she was playing the same games children do all around the world, emptying and filling vessels. At some point, her sister or cousin, a child of 4 or 5, picked up a reed from the ground and started chewing on the white end. The tour guide said, "Oh, those are the bananas of the Uros." 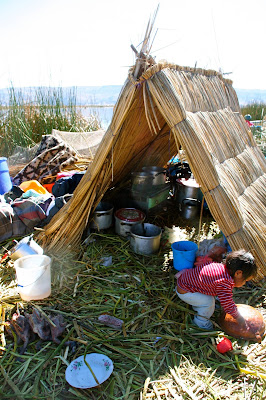 The other children seemed healthy, but this particular girl's nose was pouring and she had a rattling cough. The islanders have a life expectancy of 54 as opposed to 74 just across the water.

Poverty is terrible. What made this particularly terrible was a. that cynical tour companies bring people here and bill it as a look at a unique ancient culture and b. that these particular Uros seemed to have no idea what a degraded spectacle they made. They were beaming, fawning, trying to sell faked weavings for which they charged unreasonable amounts of money. I would have preferred it if they had been sullen and cold like some of the indigenous people we encountered elsewhere.

I'm not personally sorry that I was brought to this sad island. I'm glad. It was a memorable, depressing glimpse of the awkward and ugly transition between a traditional way of life and the 21st century.

Supposedly the Uros are flocking to the mainland in droves and I wish them godspeed.

Anyway, at some point, we were herded into one of the narrow, low reed boats, where a big group of us sat uncomfortably on the floor as one of the men rowed us very slowly in a circle. We paid $3 for this. While we were on the boat I struck up a conversation with the only other Americans on the tour, but that upsetting and short-lived friendship, which unfolds a few hours later on another island, a beautiful island, I am saving for installment two.