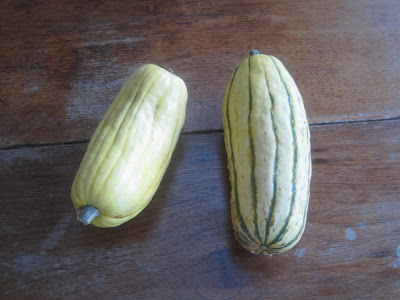 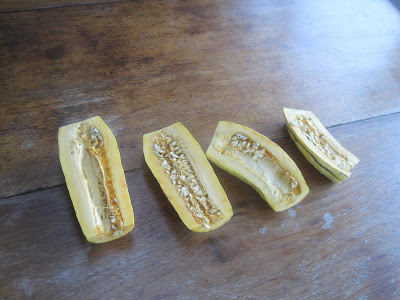 Now, cut the squashes into halves and scoop out the seeds. 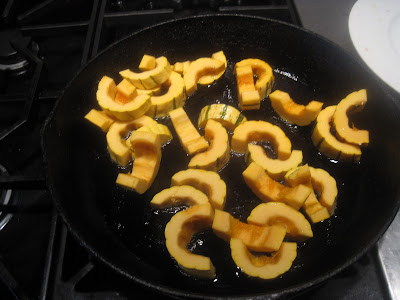 Slice them up into half-moon discs and saute them in olive oil until really brown. 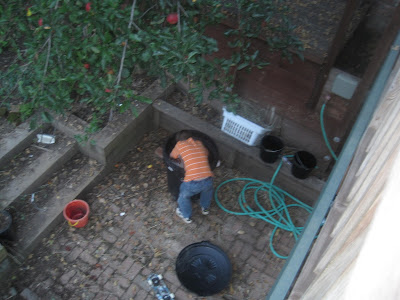 Oops. I don't know how THAT got in there. One of my little cowpokes doing his chores. Sorry. Another story for another day. Where was I? 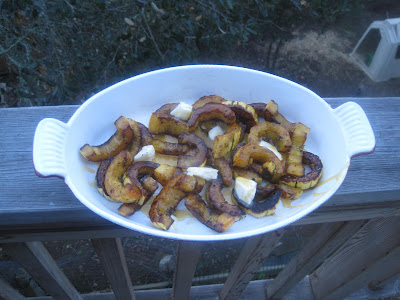 Oh right, squash. Put it in a roasting pan, dot with butter and drizzle generously with honey. Plenty of butter. Plenty of honey. Don't hate. Appreciate. 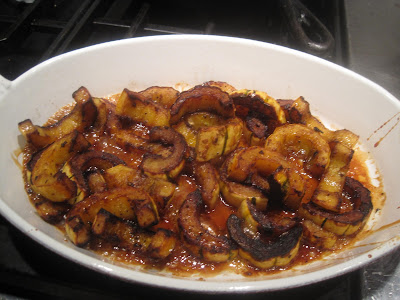 Homage/affectionate parody over. For the last 24 hours I've been unable to get PW's sweet potato cobbler recipe out of my head. I want to make it for Thanksgiving, but don't see where it fits -- seems too sweet for a side dish, at least in our house, and dessert is always pie. Thoughts? Should I just go for it as a side?

The squash above is not a PW recipe, though. It's Ethan Stowell's roasted delicata with chestnut honey. This was very tasty, albeit more caramelized than I like. I bought chestnut honey just to see why Stowell specifies it in several recipes and the flavor is indeed distinctive, with almost a metallic edge to it. Don't love it. Now I know.

Even better than the squash, though unphotographed, was the brussels sprouts salad I served with it, made using this brilliant Food52 recipe. Raw brussels sprouts taste nothing like cooked, so even haters should try this. It's fantastic.

Two thoughts about the sprout salad:

1. You could reduce the cheese and still have a delicious salad. I think you could get away with 1/4 cup, if you're at all concerned about calories.

2. She says to serve the salad right away, before it wilts. Actually, it doesn't wilt. I ate leftover salad the next day for lunch and it was crunchy and delicious. The beauty of brassica salads, as I've recently discovered, is that, unlike lettuce salads, they keep. My sister and I have in the last month both become hooked on this Martha Stewart kale salad and I seem to always have a bowl of it in the fridge. Between brussels sprouts and kale, I may never buy lettuce again.
Posted by tipsybaker at 11/19/2010 09:39:00 AM