Lamingtons and some soup 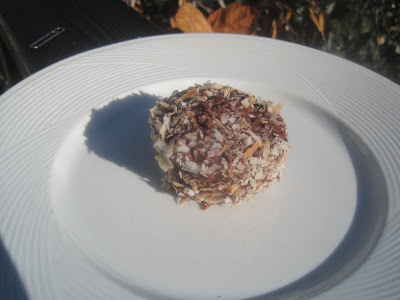 That's a Lamington cupcake made last night by Isabel. It looks like a cuddly mammal and tastes like a Sno Ball if Sno Balls were actually delicious.

Lamingtons are an Australian treat, typically square in shape and sometimes, I have read, sandwiched with jam. This American recipe comes from The Craft of Baking and involves dipping a spongy white cupcake in liquid chocolate icing and rolling it in coconut. The result is a tripartite confection: fluffy and white/sticky and chocolatey/coconutty and crunchy. All day I have been thinking of the Lamington cupcake I am going to eat, very, very slowly, tonight after dinner. Martha Stewart has an appealing recipe here, if you're interested in baking some. I would be!

I've started cooking from Thai Street Food by David Thompson. It seems futile and silly to try to replicate Southeast Asian street food in a temperate zone First World kitchen, especially in late fall, but I love this kind of food and will persevere through ten recipes. I said this was my plan, so my plan it is.

Last night, we had Thompson's roasted duck and noodle soup. 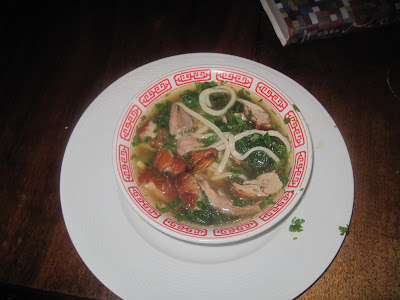 To make this, you pick the meat off half a Chinese roast duck (bought at a Chinese deli) then put the bones in a pot with some chicken stock, star anise, oyster sauce, sliced daikon and rock sugar and let it simmer for a few hours. Meanwhile, you slice the duck meat, deep fry some garlic, blanch some choy sum, boil noodles, and chop a tablespoon of Chinese preserved vegetable. You put all of these goodies in soup bowls then pour over the broth. Not exactly hard, but labor-intensive, requiring a special trip to the Asian market, lots of little steps and pinches of exotic this and even more exotic that and while the results were tasty, this was not a soup that I would go to the trouble of making again.

Lamington cupcakes are another story.

On another subject, I took the goats in for blood tests last week and am awaiting the results. Provided they're in perfect health, I'm sending them to spend some time with a buck in a week or two. This one, I think.