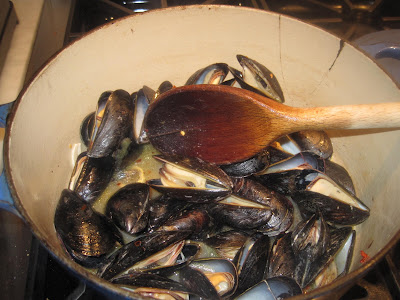 This is the kind of foreboding my cooking inspires in a 10-year-old boy:

I picked Owen up from school yesterday and he asked, in broad daylight, while still in the car, "What are we having for dinner tonight?"

I replied, "Chickpea soup with mussels."

He said, very quietly, "I guess I won't be having dessert again."

Then he pointed out that he was expressing himself the way I had asked him to the night before -- calmly and politely, at low volume.

I thanked him for that.

His low expectations of Ethan Stowell's chickpea and mussels soup turned out to be in order. He didn't touch it, and the rest of us ate it without gusto. Mussels are cheaper than clams, but I just don't know if they're worth doing at home and I definitely don't like them with chickpeas. Chickpeas are grainy and nubbly and mussels are visceral and chewy and they didn't harmonize in a soup. That was Ethan Stowell recipe #10. 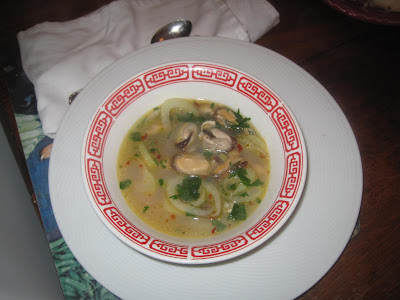 Despite mediocre soup, everyone was happy and we were having such a pleasant evening that Owen got to have dessert anyway. It was a good dessert and to deny him would have been cruel.

First, there was Stowell's toasted walnut ice cream (recipe #11). To make this, you toast whole walnuts then let them steep in hot cream. You strain them out after an hour or so, by which time they have imparted their flavor and color to the cream. This ice cream was superrich and pale brown, and I could not stop eating it.

To go with it, I baked Stowell's cardamom sables (translation: shortbread) which were agreeably easy and tasty and reminded me of a giant Parsi cardamom cookie I made a long time ago. Recipe #12. 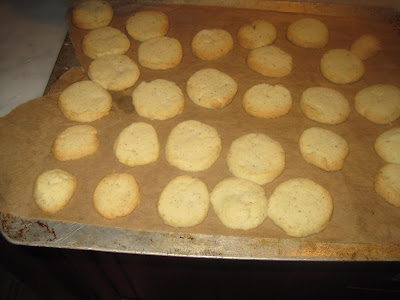 I have now exceeded my quota of recipes from Ethan Stowell's New Italian Kitchen, but may give it one more night. I can't go to San Francisco today to buy the ingredients to start Thai Street Food. That is going to require both serious planning and momentum and I don't think I can pull it off until Monday.

On another subject, if you haven't been following Food52's Tournament of Cookbooks, check it out. Today's writeup and decision, by Salon writer Francis Lam, was especially generous and thoughtful. And then I read this. Now I want that Dorie Greenspan book, which I need like another mollusk dinner.

Or another scoop of walnut ice cream. I actually untagged some photos of myself on Facebook today because I looked so plump. I was almost as ashamed of the untagging as I was of the chubbiness. But not quite.
Posted by tipsybaker at 11/17/2010 09:33:00 AM