I forgot how to blog 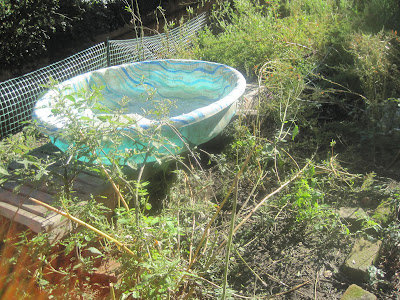 A draft of the book is done-ish and I am back to normal life and back to my cookbooks. I didn't just neglect the blog over the last few months. I throw open my french doors in the morning to gaze out at the garden and . . . want to close them.

I did stumble across this carrot growing there. I planted the seeds last spring and then forgot about them. Beautiful, no? Sadly, I waited too long to harvest. Not delicious at all. It tasted rooty. 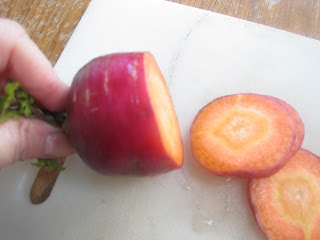 I think where I left off blogging was in the middle of making Duck Egg Ravioli with Ricotta and Swiss Chard out of Ethan Stowell's New Italian Kitchen. This would have been recipe #7 from the book. One night about a month ago, I stood there dotting a strip of pasta dough with fresh ricotta and into the middle of each ricotta blob I put a duck egg yolk. It took forever and it didn't work out right -- the dough was too sticky -- but the idea behind the recipe was so fascinating that I did it again the next night with a better dough recipe. Again it took forever, though this time it worked beautifully. The eggs barely poached inside the thin ravioli and so when you cut into the pasta, the yolks broke and formed a sauce.

I thought, I can't cook like this and blog about it and at the same time finish writing a book. 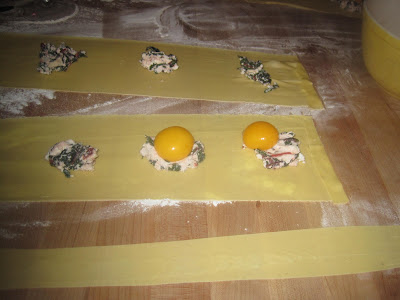 Anyway, this recipe is on page 104 of Stowell's book and if you make it with Marcella Hazan pasta dough, it is great. I would make this again, except we gave away the ducks.

This cookbook reviewer really loathes Ethan Stowell. He makes her want to poke hot needles into her eyes. I agree with many of her points, that this book is overly precious and "cheffy," but I think her reaction is a bit extreme. I'm also puzzled by the fact that she didn't seem to cook a single recipe. I'm always interested in a conceptual critique, but also think you need to try the recipes before weighing in on a cookbook. This particular book becomes far less irritating when you actually use it -- there are some fantastic recipes in here, not all of them cheffy and ridiculous.

Last night I made Ethan Stowell recipe #8: Clam Risotto. We haven't had a real barn burner family fight at the dinner table in a while, but the clam risotto go us going. Felt like old times. Owen screaming, me yelling back, Isabel rolling her eyes, etc. Classy. Just the words "clam risotto" may go down in family lore. I liked the clam risotto fine and it was simple to throw together, but the associations are now very bad. Also, it was gray. And clams cost more than I think they're worth. Not so into clams.

But we had the best salad to go with it: Endive Salad with Creamy Meyer Lemon Vinaigrette. Owen was outraged that there wasn't enough for him to have seconds. That was part of the fight. It was that good. I am putting the recipe here with a few changes. You have to boil the lemon rind three times, which caused me to roll my eyes, but it is so easy, just do it. Also, it calls for a raw egg yolk which would probably weird me out if I bought supermarket eggs after the events of late summer. So probably you should invest in farmers' market eggs if you make this salad, or get some chickens. I tell you, it is a gem, this recipe. 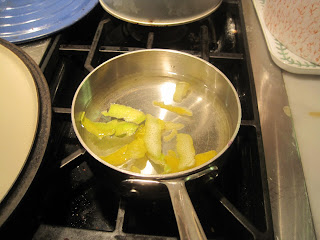 1. Remove the outer leaves from the endive and trim the stems, leaving enough intact so that the endives hold together. Quarter the endives lengthwise. Soak them in salted water for 10 minutes.

2. Peel strips of zest from one lemon. Wide is fine. Put in a small saucepan with water to cover, bring to a boil, then drain. Repeat three times.

3. Juice the lemons. Put the juice, the boiled lemon rind, the water, egg yolk, mustard and salt in a a blender. Pulse. Add both the oils in a slow steady stream. You'll end up with a mayonnaise-like dressing, very soft and pale yellow. Taste for salt.

4. Place endives, nuts, parsley in a bowl and toss with dressing to lightly coat. (You may have dressing left over -- don't overdress.) Top with the radishes. Beautiful! Should serve six.
Posted by tipsybaker at 11/16/2010 10:54:00 AM